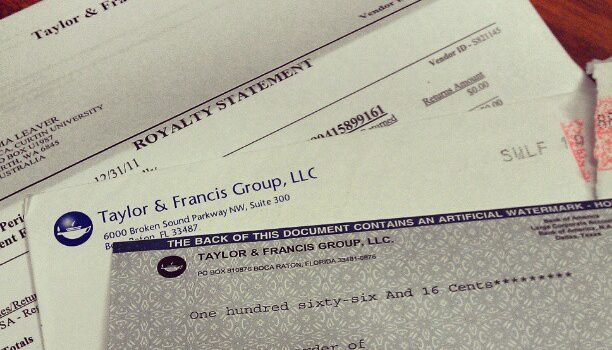 My first ever royalties cheque! by Tama Leaver https://flic.kr/p/bxRoZJ (CC BY 2.0)

Of particular note may be the recommendations for action and the appendix, which features links to relevant posts on all issues raised in the brief. The recommendation section states:

Recent Canadian copyright developments have addressed many of the key concerns from the creative industries and artists. For example, the extensive Copyright Board of Canada reforms contained in Bill C-86 comprehensively address longstanding concerns with the administration of copyright. The bill received royal assent on December 13, 2018.

Moreover, the copyright provisions in the Canada-US-Mexico Agreement significantly alter the copyright balance by extending the term of copyright by additional 20 years beyond our current law and the international standard found in the Berne Convention. By doing so, there is a need to recalibrate Canadian copyright law to restore the balance.

There are additional reforms that would benefit the creative sector. The government should work with Canadian publishers to ensure their works are available for digital licensing either in bundles or through transactional licenses. Given that digital licenses are sometimes the only source of revenue – Access Copyright’s Payback does not compensate for older works and print sales of old books is typically non-existent – embracing the digital opportunities with a forward looking approach may be the only revenue source for some authors.

Governments should continue to pursue alternative publishing approaches that improve both access and compensation. For example, the government’s recent announcement of funding for creative commons licensed local news should be emulated with funding for open educational resources that pays creators up front and gives education flexibility in usage. This would be consistent with a study commissioned for the Association of Canadian Publishers, which found:

“The OER movement continues to grow and is becoming a cornerstone of the Canadian K–12 educational system. The proliferation of OER content is evident across the country and there are numerous initiatives that support the development, access, and distribution of content.”

Further transparency in creator remuneration is also needed. This would include greater transparency for payments from Internet platforms and streaming services as well as from payments and the administration of copyright collectives.

The committee should also recommend greater support for artists in addressing the contractual imbalances between creators and publishers or record labels. For example, Bryan Adams’ recommendation on reversion rights should be adopted to address one-sided creator-music label contracts. Further, a closer consideration of author royalties from publishers arising from new digital licences is needed.

Non-copyright policies should also be examined. For example, Canadian content rules for film and television production currently treat Canadian book authors as irrelevant for Cancon qualification. Reforms to the criteria of qualification for Canadian content are long overdue to ensure that the benefits designed to support Cancon creation accrue to all Canadian creators.

The State of Piracy in Canada

The Case Against the Bell Coalition’s Website Blocking Plan, Part 2: Weak Evidence on the State of Canadian Piracy

Canadian-backed report says music, movie, and software piracy is a market failure, not a legal one

Canadian Copyright, Fair Dealing and Education, Part One: Making Sense of the Spending,

Value Gap and the Music Industry

Film and Television Production in Canada

The Case Against the Bell Coalition’s Website Blocking Plan, The Finale

USMCA sends Canada back to the drawing board on copyright law

The Trouble With the TPP’s Copyright Rules

Setting the Stage for the Next Decade of Open Access