Or consider this tweet from Canadian Heritage, which cites Section 2.1(1) to provide assurances that the “Act would not apply to Digital First Creators. Users of social media services would never face obligations.” 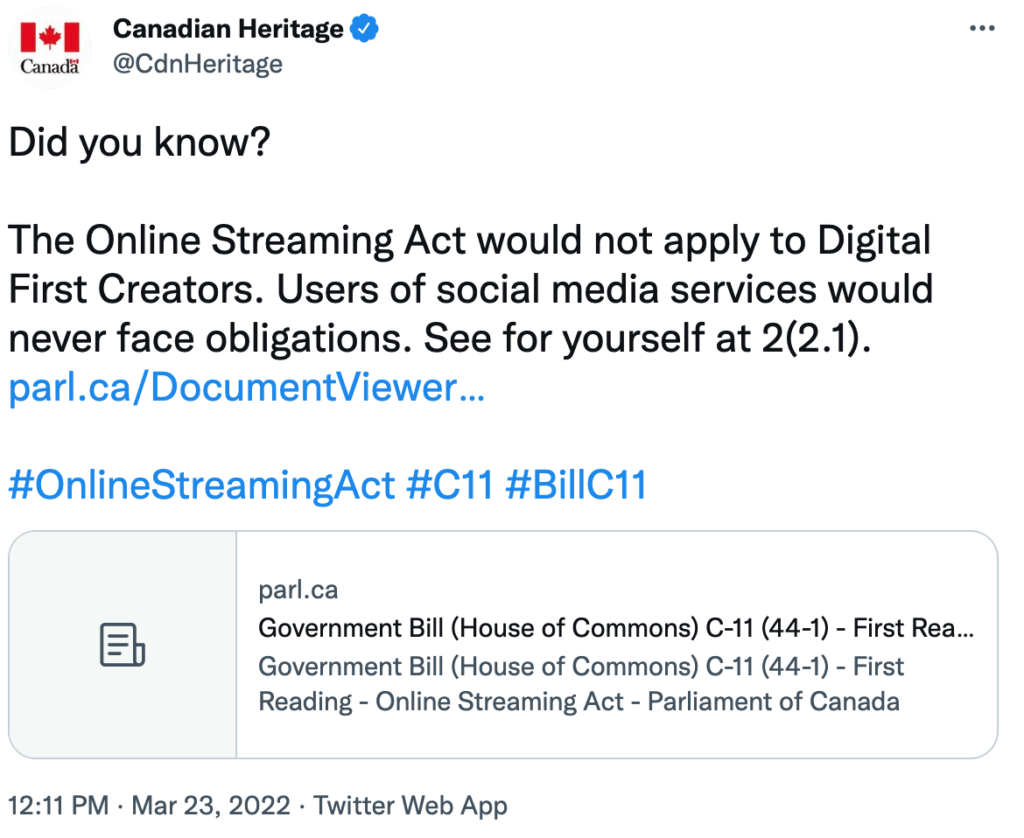 Once again this is misleading. While it is true that users will be not be treated as broadcasters due to that section, Section 4.2 opens the door to regulating their content. They might not directly face obligations, but if their content is caught by the Act, the implications for digital first creators is enormous and potentially damaging.

The comments coming from the Minister’s office aren’t any better. A Canadian Press article over the weekend that placed the spotlight on the harms to Canadian digital creator earnings features a Rodriguez spokesperson stating “the act would give online streaming platforms the flexibility to choose how they contribute and how they make Canadian commercial content easier to find.” This is yet another misleading statement. The policies about contributions and discoverability will fall to the CRTC. The Commission may provide the platforms some leeway in how they achieve those policies, but the requirements are set by the government and its regulator, not the companies.

The tone for the government’s communication on Bill C-11 was established from the very beginning. In the very first speech from Rodriguez in the House of Commons, he stated “the proposed amendments in the online streaming act regarding social media would not apply to content uploaded by users or to the users themselves.” This too is misleading since there are exceptions to the exception that does mean that the bill may be applied to content uploaded by users, particularly for digital first creators, podcasters, or other streamers who may benefit commercially from their uploads.

This approach continued yesterday during the debate where Hamilton-area MP Lisa Hepfner dismissed concerns about digital first Canadian creators as “YouTube talking points” and told the House of Commons “the world of broadcasting would not have long to live if it were not for this legislation.” Seriously? That is probably news to Canadian broadcasters such as Bell or Rogers, who have never once disclosed that their future depends on Bill C-11. In fact, the bill offers very little to Canadian broadcasters. Bringing online platforms into the regulatory system has implications for the some cultural groups who anticipate additional financial support, but the broadcasters’ existing regulatory obligations remain largely unchanged.

But perhaps most troubling was the emergence of a new catch-all response to concerns with the bill, namely a still-secret policy direction to the CRTC that will only be revealed after Bill C-11 has received royal assent. MP Francesco Sorbara was tasked with making the case for the policy direction in his comments, stating:

The policy direction has two primary goals. First, it will focus on the importance of consultation and special consideration of the needs of equity-seeking groups. Second, the direction will make clear areas where regulation is needed, as well as areas where flexibility should be exercised.

Concerned about the implications of regulation of video games? Sorbara assured the House that “the policy direction will also specify the government’s intent when it comes to video games, and gaming is a very big industry in Canada, whether it is in Vancouver, Montreal or here in Ontario. I will repeat again that video games are not to be regulated.”  How about Canadian digital first creators? Sorbara told the House “a policy direction is an opportunity to clarify the government’s policy intent on certain issues regarding social media platforms and digital first creators.” Of course, the policy direction remains secret and MPs will be asked to vote on the bill without knowing its precise content or the ultimate implications of the legislation.

In fact, Sorbara went further and said “content from digital first creators will not face any obligations related to showcasing and discoverability.” This highlights the incredible inconsistency in the government’s defence of Bill C-11, where the Minister’s office suggests digital first creators are outside of the bill, Sorbara acknowledges that they may be in the bill but will be excluded by a policy direction, and Hepfner dismisses the concern altogether as “Youtube talking points.”