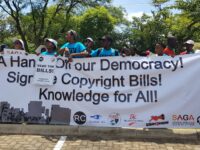 Access to Knowledge in Africa: The Role of Copyright

My colleague Jeremy deBeer is one of several researchers who has edited a new volume that provides a detailed look at the role of copyright on access to knowledge in Africa.  The full book is available as a free download.

IP Watch reports on a recent speech from two Nobel Prize laureates on how intellectual property protection is closing down access to knowledge.

Delegates from around the world are meeting in Geneva this week to work on the critically important World Intellectual Property Organization Development Agenda.  The WIPO Development Agenda represents a major effort from developing countries to ensure that global IP policy adopts a broader perspective by better reflecting the needs of […]

I spent the Friday and Saturday at Yale Law School’s Access to Knowledge conference. It is still early days in this movement, but witnessing the growth of the network and commitment to this issue is incredibly exciting.  The conference has a detailed wiki for those interested in the panels, which […]