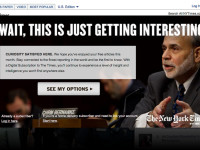 Does asking a friend for a copy of a newspaper article from a subscription website constitute copyright infringement? According to an Ottawa small claims court, it does.

The court recently issued a deeply flawed copyright ruling, providing a timely warning about the dangers of Canada’s restrictive digital lock rules that were enacted by the Conservatives over the strong objection of many copyright watchers.

My weekly technology law column (Toronto Star version, homepage version) notes that the case involved the president of the Canadian Vintners Association (CVA), who received an email from Blacklock’s Reporter, an Ottawa-based political publication, advising that he was quoted in an article discussing a recent appearance before a House of Commons committee. The man did not subscribe to the publication, which places its content behind a paywall, so he contacted a member of the association who was a subscriber and asked if he could see a copy of the article. When Blacklock’s Reporter learned that he had received a copy from the subscriber, it demanded that he pay for a full subscription or face a copyright infringement lawsuit.

The International Intellectual Property Association, which represents large copyright lobby groups such as the RIAA, MPAA, BSA, and ESA, has released its annual report on the state of intellectual property protection in dozens of countries around the world. The report is designed to convince the U.S. government to place countries on the “Special 301 watchlist”. Canada is regularly cited, though Canadian officials have noted:

This report is what Canadian officials have in mind when they talk about it being driven entirely by U.S. industry. There are many aspects worth noting in this year’s report – the criticism of countries like Vietnam and the Philippines for encouraging the use of open source software (the Vietnamese program was established to help reduce software piracy), the criticism of Bill C-32’s digital lock provision that allows cabinet to establish new exceptions (the IIPA would like any new exceptions to be both limited and for a limited time), and the near universal demand that countries spend millions of public dollars on increased policing, IP courts, and public education campaigns.

Of particular note, however, is the fact that the IIPA report provides a fairly convincing case that there is considerable flexibility in implementing the WIPO Internet treaty anti-circumvention rules.

One of the biggest stories coming out of the latest ACTA leak is how the U.S. has gradually caved on its digital lock demands.  While the U.S. initially proposed an aggressive draft chapter it hoped would export U.S. law to all ACTA partners, it has now caved on many key issues with the European language carrying the day.  The implications for anti-circumvention rules are significant, since the language is closer (though not identical) to the more flexible WIPO approach and confirms that Canada’s Bill C-32 actually goes beyond would be needed to comply with ACTA, were it to conclude in its current form.

Before examining the changes, it should be noted that there remain doubts about whether this chapter even belongs in ACTA.  Both Canada and Mexico have reserved the right to revisit all elements of this chapter at a later date, suggesting that both countries have concerns about the digital enforcement chapter.  Moreover, there are still disputes over the scope of the Internet chapter, with the U.S., Australia, NZ, Canada, Singapore and Mexico seeking to limit the chapter to trademark and copyright, while Japan, the EU, and Switzerland want to extend it to all IP rights.  Without resolving this issue, there is no digital enforcement in ACTA.

The Supreme Court of Canada has been very active on copyright issues over the past decade with cases such as Theberge, CCH, and Tariff 22.  In the Theberge case, Justice Binnie identifed a crucial point when it comes to striking the right balance on copyright, stating
“The proper balance among these and other public policy objectives lies not only in recognizing the creator’s rights but in giving due weight to their limited nature.  In crassly economic terms it would be as inefficient to overcompensate artists and authors for the right of reproduction as it would be self-defeating to undercompensate them.”

Brazil recently unveiled its much anticipated copyright reform proposal and it provides a statutory example of applying this principle.  Article 107 includes an interesting balance to legal protection for digital locks.

Osgoode Hall's Carys Craig has a must-read article which appears in the Journal of World Intellectual Property, that warns against U.S. style implementation of anti-circumvention legislation.  Craig offers several alternatives if the Canadian government moves forward with anti-circumvention rules, including TPM registration requirements, a clear link to actual infringement, and […]