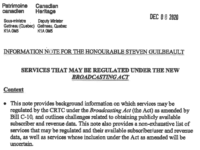 Canadian Heritage Minister Steven Guilbeault has tried to deflect public concern with the regulation of user generated content under Bill C-10 by claiming the intent is to make the “web giants” pay their fair share. Yet according to an internal government memo to Guilbeault signed by former Heritage Deputy Minister Hélène Laurendeau released under the Access to Information Act, the department has for months envisioned a far broader regulatory reach. The memo identifies a wide range of targets, including podcast apps such as Stitcher and Pocket Casts, audiobook services such as Audible, home workout apps, adult websites, sports streaming services such as MLB.TV and DAZN, niche video services such as Britbox, and even news sites such as the BBC and CPAC.

The regulations would bring the full power of CRTC regulation over these sites and services. This includes requiring CRTC registration, disclosure of financial and viewership data, Canadian content discoverability requirements (yes, that could mean Canadian discoverability for pornography services), and mandated payments to support Canadian film, television, and music production. The list also notably identifies potential regulation of Youtube Music, Snapchat Originals, and other social media services whose supposed exclusion has been cited as the rationale to extend regulation to user generated content.