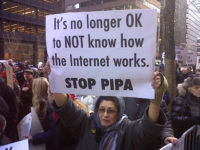 Today is Internet Freedom Day, a day to celebrate efforts to ensure an open and free Internet. Coming on the anniversary of the Wikipedia blackout that successfully stopped the Stop Online Piracy Act in the United States, it is worth thinking about the many successes (ACTA, Internet surveillance in Canada), […]

Over the past few years, the Motion Picture Association – Canada, the Canadian arm of the MPAA, has recorded nearly 100 meetings with government ministers, MPs, and senior officials. While their lobbying effort will not come as a surprise, last October there were several meetings that fell outside the norm. On October 18, 2011, MPA-Canada reports meeting with Canadian Heritage Minister James Moore, Foreign Minister John Baird, and Industry Canada Senior Associate Deputy Minister Simon Kennedy, all on the same day. These meetings occured less than three weeks after the introduction of Bill C-11 and the decision to sign ACTA, and only eight days before SOPA was launched in the U.S.

Given how unusual it is for a single lobby group to gain access to two of Canada’s leading cabinet ministers and a senior department official on the same day, it begs the question of how they did it.

The Canadian intellectual property’s lead lobby group, the Canadian IP Council (itself a group within the Canadian Chamber of Commerce) released a new policy document yesterday that identifies its legislative priorities for the coming years. Anyone hoping that the SOPA protests, the European backlash against ACTA, and the imminent passage of Bill C-11 might moderate the lobby group demands will be sorely disappointed. Counterfeiting in the Canadian Market: How Do We Stop It? is the most extremist IP policy document ever released in Canada, calling for the implementation of ACTA, SOPA-style rules including website blocking and stopping search results from resolving, liability for advertisers and payment companies, massive surveillance at the border and through delivery channels including searching through individual packages without court oversight, and spending hundreds of millions of tax dollars on private enforcement.

This long post reviews the report, focusing on the case it makes for addressing counterfeiting concerns in Canada and on the resulting recommendations. The recommendations are divided into five main groups:

Benkler on the SOPA & ACTA Protests

Harvard professor Yochai Benkler recently delivered an exceptional talk examining how the SOPA and ACTA protests unfolded. The talk highlights the role of online new sources and the rapidly changing key players in raising awareness or generating protest activity. The Guardian: Blueprint for Democratic Participation from The Guardian and The […]