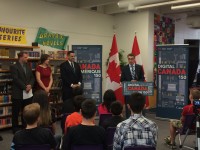 Appeared in the Toronto Star on April 5, 2014 as Digital Canada 150: The Digital Strategy Without a Strategy Four years after the Canadian government first announced plans to develop a digital economy strategy, Industry Minister James Moore traveled to Waterloo, Ontario, Friday for the release of Digital Canada 150. […]