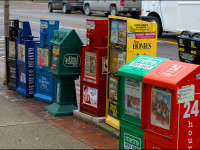 Last week, I appeared before the Standing Committee on Canadian Heritage as part of its study on the future of media. The committee has heard from dozens of witnesses and one of the surprising themes has been the emphasis on copyright reform as a potential solution to the newspaper industry’s woes. My opening remarks, which are posted below, warn against the reforms, including the prospect of new taxes on Internet services or linking as a source of revenue for the industry. Instead, I point to several potential policies including an ad-free online CBC, sales taxes for digital services, and non-profit funding models for investigative journalism.

The Q & A that followed with me focused primarily on copyright law. The copyright discussion stems from the fact that several earlier witnesses implausibly claimed that it would help solve the problems facing news organizations. For example, Bob Cox of the Canadian Newspaper Association told the committee: