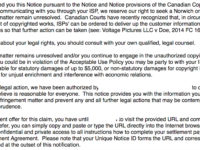 Why Has the Government Failed to Act on Copyright Notice-and-Notice When Internal Docs Raise Abuse and Fraud Concerns?

Canada’s copyright notice-and-notice system has been the subject of controversy and misuse since the moment it launched in 2015.  The system was intended to educate the public on copyright and reduce infringing activity through awareness (experience indicated the approach worked), but has been misused by copyright owners who have used it to send millions of settlement demands to unsuspecting Canadians.  The misuse of the system was even the subject a question to Prime Minister Justin Trudeau during question period earlier this year.

While fixing the problem should be relatively easy – new regulations could prescribe precisely what may be included in the notice or there could be a prohibition on including settlement offers or demands within the notices – but the government has dragged its feet on the issue. The Conservatives knew there was a problem, but instead chose to prioritize extending the term of copyright for sound recordings after a behind-the-scenes lobbying campaign. The Liberals have similarly not acted on the issue, putting Copyright Board reform ahead in the queue.