Last week, I delivered an hour-long speech on copyright to the Canadian Federation of Students (the slides are here and posted below and a podcast is here).  Since the audio on the podcast version of the talk is poor, I want to reiterate my central message.  In the past, I have spoken frequently about the opportunity for Canada to make its own choices on copyright reform.  After highlighting the remarkable array of new developments for content creation, content sharing, and knowledge sharing, I have emphasized the need for copyright laws that look ahead, rather than behind.  In particular, I have pointed to the dangers associated with anti-circumvention legislation, to the need for more flexible fair dealing, to the desirability of eliminating crown copyright, and to the benefits of open access and open licensing.  I typically conclude by stating that this can be Canada's choice and that we must choose wisely.

This speech had a different conclusion, however.  Sometime over the next two or three weeks, Industry Minister Jim Prentice will rise in the House of Commons and introduce copyright reform legislation.  We can no longer speak of choices because those choices have already been made.  There is every indication (see the Globe's latest coverage) this legislation will be a complete sell-out to U.S. government and lobbyist demands.  The industry may be abandoning DRM, the evidence may show a correlation between file sharing and music purchasing, Statistics Canada may say that music industry profits are doing fine, Canadian musicians, filmmakers, and artists may warn against this copyright approach, and the reality may be that Canadian copyright law is stronger in some areas than U.S. law, yet none of that seems to matter.  In the current environment and with the current Ministers, politics trumps policy.

The new Canadian legislation will likely mirror the DMCA with strong anti-circumvention legislation – far beyond what is needed to comply with the WIPO Internet treaties – and address none of the issues that concern millions of Canadians.  The Conservatives promise to eliminate the private copying levy will likely be abandoned.  There will be no flexible fair dealing.  No parody exception. No time shifting exception.  No device shifting exception.  No expanded backup provision. Nothing.

The government will seemingly choose locks over learning, property over privacy, enforcement over education, (law)suits over security, lobbyists over librarians, and U.S. policy over a "Canadian-made" solution.  Once the bill is introduced, look for the government to put it on the fast track with limited opportunity for Canadians to appear before committees considering the bill. With a Canadian DMCA imminent, what matters now are voices. It will be up to those opposed to this law to make theirs heard.

Update: Many people have asked what they can do to make their voices heard on this issue. Last year, I posted 30 Things You Can Do about anti-circumvention legislation.  Many of those recommendations still apply, starting with a letter (letter, not email – no stamp required) to your Member of Parliament, the Ministers of Industry and Canadian Heritage, and the Prime Minister.

The Canadian Association of University Teachers recently held a major conference on intellectual property issues.  I was delighted to provide the keynote address, which I titled Cancopy Law.  The talk criticized the current incarnations of “cancopy law” (which include CMEC’s Copyright Matters and Access Copyright’s Captain Copyright) and discussed the importance to education of adopting a progressive approach to copyright. A podcast of the talk is now available. 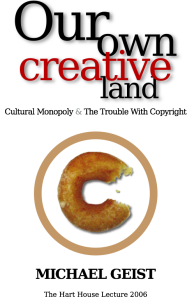 In my Hart House Lecture, Our Own Creative Land: Cultural Monopoly and The Trouble With Copyright, I discussed a number of topics, including the Bulte incident, the opportunities presented by the Internet, the context of the current round of copyright reform. I concluded by  sketching out an alternative and forward-looking vision of Canadian copyright law.

The  audio is available as part of the Needs No Introduction series on Rabble.ca and a lecture book in PDF form is available for free download.

A video broadcast of the lecture appeared on TVO’s Big Ideas program, but is no longer available online.

Copyright debate on TVO’s the Agenda (view and listen/MP3 on TVO.com).

As I watch with admiration at the many sites that have added podcasts to their mix, I have been hoping to do the same.  That may happen some time in the future, but in the meantime, I was recently interviewed for the Electric Sky podcast, a local Ottawa podcast site.  We discussed Canadian copyright issues including some of the recent legislative proposals.  I think I sound a bit subdued, but it was a fun experience and it is great to see the budding enthusiasm for these new forms of expression.