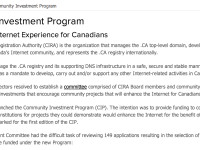 The Canadian Internet Registration Authority today announced the first round of recipients in its Community Investment Program. I ran for the CIRA board in the hope that the organization would establish this kind of program and I’m thrilled to see it come to fruition. CIRA received 149 applications (I reviewed […]

The Canadian Internet Registration Authority, the organization that manages the dot-ca domain, has unveiled an exciting new initiative that will deliver a million dollars toward community projects, research, and other related activities (full disclosure: I am a member of the CIRA board and chair of the committee that will review […]

American Girl, the well-known doll maker, recently lost a domain name battle over AmericanGirl.ca as panelist Bradley Freedman ruled that the company failed to meet the basic requirements in the dot-ca dispute resolution policy. The case should have been a slam dunk as the company’s trademark pre-dates the domain name […]

The Internet governance world gathers in Toronto this week as the Internet Corporation for Assigned Names and Numbers (ICANN), the California-based non-profit corporation charged with the principal responsibility for maintaining the Internet’s domain name system, holds one of its meetings in Canada for only the third time. My weekly technology law column (Toronto Star version, homepage version) notes the Toronto ICANN meeting comes at a particularly tumultuous time for the organization with mounting criticism over its process for creating new domain name extensions that could reshape the Internet.

After years of debate and discussion, ICANN last year unveiled a policy that opened the door to hundreds of new domain name extensions. While most Internet users are accustomed to the current generic (dot-com, dot-net, and dot-org) and country-code (dot-ca in Canada) extensions, ICANN’s plans will radically change the domain name landscape by creating hundreds of new extensions linked to brand names, geographic regions, and even generic words.

The Canadian Internet Registration Authority released the results of its board of directors election yesterday and I was very pleased to be elected to the board with the largest number of votes of any candidate. I’m grateful to CIRA members for their support, particularly given the many excellent candidates who […]