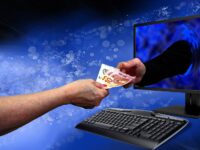 The CBC reports that Vancouver Olympic organizers have filed suit against a B.C. ticket re-seller.  Without a ticket re-sale law in the province, VANOC is using copyright and consumer protection legislation.