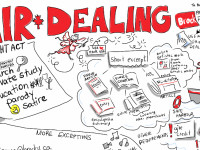 Last year, the Writers’ Union of Canada and Union des Ã‰crivaines et des Ã‰crivains Quebecois announced that they were joining a lawsuit against HathiTrust, a consortium of U.S. universities that work with Google on the digitization of millions of books. The lawsuit, which was led by the Authors’ Guild in the U.S., challenged the legality of scanning millions of books and placing the books in the HathiTrust Digital Library (HDL). Yesterday, a U.S. court ruled resoundingly for the universities, concluding that the practices fall squarely within U.S. fair use (good analysis from Grimmelman, Madison, Smith and Krews). The case is an important win for fair use and it points to a potential model for Canadian universities that have lagged behind in ensuring digital access to materials.

The HDL, a joint project of the University of California, University of Wisconsin, Indiana University, Cornell University and University of Michigan, used digital copies originally scanned by Google to allow for three purposes: (1) full text searches; (2) preservation; and (3) access for people with print disabilities. The universities implemented access to the database of scanned books in different ways. The full text search functionality enabled users to search through millions of books for particular terms. If the book was not in the public domain or there was no authorization from the copyright owner, searches only indicated the page number where the search term was found with no actual text copied. Students with print disabilities were able to access the full-text through a secure system that was not available to the general public or student body.

Posner on Copyright: Restrictive Fair Use a Risk To Creativity

Judge Richard Posner, one of the best regarded judges in the world, has a blog post in which he expresses concern about the potential for patent and copyright law to restrict competition and creativity. On patents, Posner notes:

When patent protection provides an inventor with more insulation from competition than he needed to have an adequate incentive to make the invention, the result is to increase market prices above efficient levels, causing distortions in the allocation of resources

He continues by citing the software industry as an example of the dangers of excessive patent protection. On copyright, he expresses doubt about the social benefit of copyright for any academic work other than textbooks, noting that they are a by-product of academic research that would be produced with or without copyright protection. His two major concerns involve the term of copyright (which is longer in the U.S. than in Canada but could be extended under the TPP) and narrow interpretations of fair use:

KEI has posted a leaked version of the U.S. fair use proposal for the Trans Pacific Partnership. The leak raises significant concerns about the language that may create new restrictions. It also highlights a divide among TPP countries (Canada has yet to participate in the negotiations) with Australia supporting the […]

Has Canada Effectively Shifted from Fair Dealing to Fair Use?

The reverberations from yesterday’s Supreme Court of Canada copyright decisions will be felt for years (good coverage of the decisions include posts from Mark Hayes, IP Osgoode, Barry Sookman, Howard Knopf, the Toronto Star, and the CBC). While much of the coverage has focused on the music downloading issue, the continued expansion of fair dealing is perhaps the most significant development.