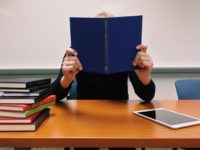 Gizmodo has photos and video from a protest over the removal of text-to-voice functionality from the Kindle 2.