Billboard runs a story today titled Canadian Biz Raises Concerns About Government Appointment.  The article features music industry criticisms of new Canadian Heritage Minister James Moore, with comments of the "fox running the chicken house" and that the appointment is "a kick in the head of Quebec for not supporting Harper."  Those unwarranted criticisms suggest that Moore will not be sensitive to music industry demands since he has a broadcasting background and is not from Quebec.

Both of these criticisms are off-the-mark.  First, a broadcast background increasingly appears to be a pre-requisite for the position – Josee Verner, Bev Oda, and Liza Frulla all came from the broadcast industry and no one would accuse them of siding against the music industry.  Second, the notion that a Heritage minister must come from Quebec is also wrong – Sheila Copps is widely viewed as the most influential Heritage minister in recent times and she was from Hamilton.

The reality is that it is far too early to cast judgment on the appointment.

New Ministers at both Industry and Canadian Heritage — Prentice is out and Tony Clement in at Industry; Verner out at Heritage and James Moore is in.  As I noted last week, copyright should not be a top priority issue (notwithstanding the campaign commitment to re-introduce legislation) given the bigger […]

The Canadian cultural community has been abuzz over the past two weeks as details emerge about the government's plans to cut millions of dollars from nearly a dozen culture programs. My weekly technology law column (Toronto Star version, homepage version) notes that while the cuts may find support among some Canadians opposed to public funding for the arts, a closer look at the plans reveal that this has little to do with handouts to artists.  Rather, the affected programs are focused on industrial policy and the creation of a digital information strategy. 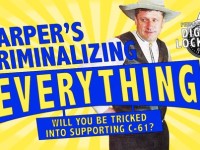 “They Indeed Have Gone Crazy”

The Globe and Mail reports that the Liberals have vowed to amend Bill C-10, even if it triggers an election.