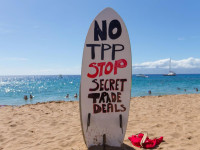 This past weekend was a busy one politically as Canada was launched into a lengthy election campaign just as countries negotiating the latest round of Trans Pacific Partnership negotiations in Hawaii failed to conclude a deal. With reports that there may be a follow-up ministerial meeting within weeks, Canadian officials have been quick to claim that the election campaign will not interfere with the TPP trade talks.

To support the claim that the government is permitted to continue negotiating even when it is a “caretaker” government, the Privy Council Office yesterday released a document titled Guidelines on the Conduct of Ministers, Ministers of State, Exempt Staff and Public Servants During an Election. In previous elections, this document was not publicly released, leading Liberal MP Ted Hsu to table a motion in 2011 calling for its availability and to recent op-eds raising the same concern.

Why the sudden change of heart? Perhaps it has something to do with the desire to release this paragraph: