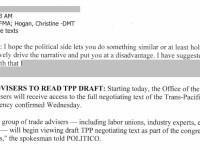 The Trouble With the TPP, Day 34: PMO Was Advised Canada at a Negotiating Disadvantage

Price of Entry, one of the early Trouble with the TPP series posts, discussed some of the conditions of entry for Canada into the TPP negotiations. These included the absence of “veto authority”, which meant that Canada could not hold up any chapter if it was the only country opposing a provision. This ultimately had a significant impact on the intellectual property chapter, where Canada had little choice but to cave on several issues.

Conditions of entry were not the only disadvantage faced by the Canadian negotiators. According to an internal email I recently obtained under the Access to Information Act, Canadian officials were aware that they were at a disadvantage relative to the U.S. in the late stages of the negotiations. The email dated July 9, 2015, was sent to Kirsten Hillman, Canada’s lead TPP negotiator, and Christine Hogan, the International Trade Deputy Minister. It notes that the U.S. had cleared access to the full negotiating text for a wide range of advisors, including business groups and public advocates, but infers that Canada had not done the same. It continues:

I hope the political side lets you do something similar or at least hold technical briefings, or the US will effectively drive the narrative and put you at a disadvantage.