Further, when asked by the Wire Report about two meetings last October reported by Bell in the lobbyist registry with Scott Hutton, the CRTC’s Executive Director of Broadcasting (and Acting Secretary General last fall), the CRTC responded that there was only one meeting and that it did not involve FairPlay. 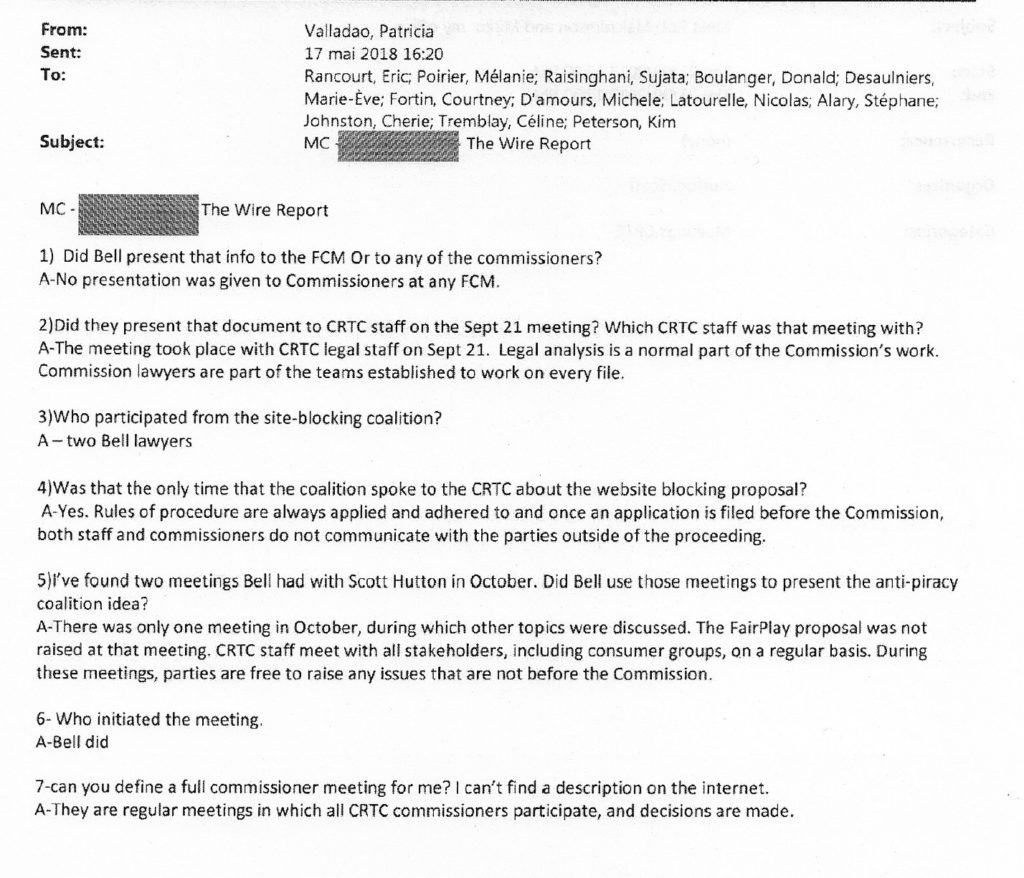 Newly obtained documents obtained under the Access to Information Act tell a different story. Bell properly registered its meetings in the lobbyist registry, but the CRTC’s response to reporter questions was far less fulsome. First, there were in fact two Bell meetings with Hutton in October: one on October 5th and another October 30th. The CRTC’s claim that there was only one meeting was inaccurate. When asked about the documentation, a CRTC spokesperson acknowledged that the October 30th meeting took place over breakfast at the ADISQ radio awards to discuss radio issues. Despite the inaccuracy, the CRTC spokesperson inexplicably claimed that the “information previously provided to a reporter was accurate.”

Second, the two October meetings were not the only Hutton meetings with Bell. Documents reveal that Hutton also met with Bell on September 21st, immediately after the meeting with CRTC legal staff.

The Hutton meeting is not registered in the lobbyist registry because Hutton was not Acting Secretary General at the time and the meeting was therefore not reportable under the Access to Information Act. As for the substance of the meeting, the CRTC says that site blocking was not discussed, rather “various broadcasting matters.”

In other words, according to the CRTC and now-public records, Bell executive Rob Malcolmson asked a CRTC commissioner for a meeting on site blocking in July, raised site blocking before a House of Commons committee on September 20th, delivered a full powerpoint presentation to CRTC staff on site blocking on September 21st, and then walked down the hall to meet with the CRTC’s Executive Director of Broadcasting but did not bother to mention the issue.

Irrespective of the credibility of the CRTC’s rendition of what occurred, the documents again highlight the risks associated with backroom, secret meetings on policy proposals, which the Commission itself admits may not need to be publicly disclosed. Reforms to the access-to-information system to ensure those meetings with senior Commission officials are captured under the law are long overdue.