The Canadian Heritage memo summarizes the Bibic email, noting that Bell spends on news and other programming not covered by Netflix. On the issue of scripted programming, however, the memo appears to concede that Netflix spends more than Bell Media. Part of the memo is redacted due to commercial reasons, but the key sentence states:

The redacted information would appear to confirm that Netflix outspends Bell on English scripted programming, since that is precisely what Bibic says he was told in his meeting with Canadian Heritage officials. Bibic writes that “you indicated that Netflix spends more on Canadian content than the private Canadian broadcasters.” Bibic notes that he “presumes that Netflix has shared with the Department the data (presumably with appropriate backup) to justify their claim that they spend more than Canadian broadcasters in Canada.” 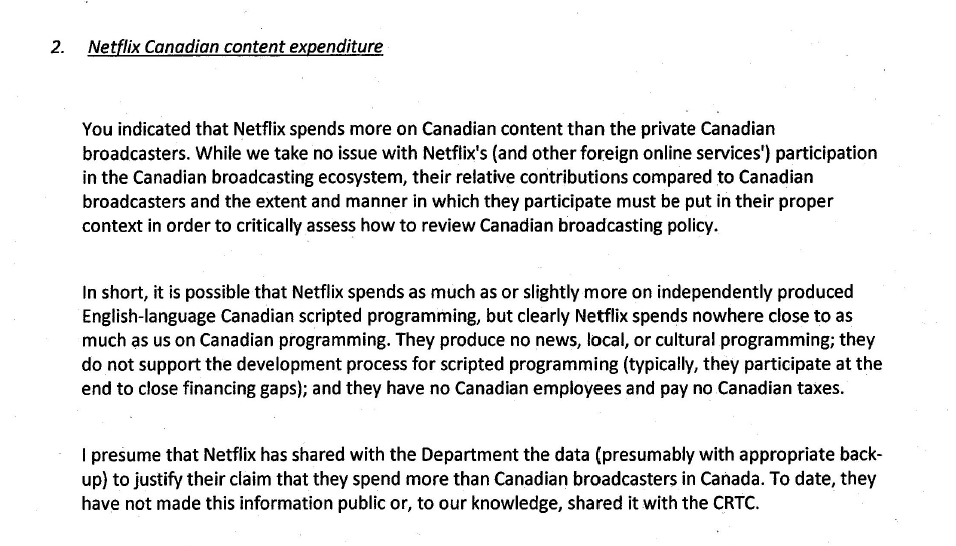 Yet public information on production spending is consistent with the government’s memo. When Netflix began investing in original content in 2013, the total foreign investment in Canadian productions (including foreign location and service production, Canadian theatrical, and Canadian television) was $2.2 billion. That number has doubled in the last five years, now standing at nearly $4.7 billion. Canadian content production hit an all-time high last year at $3.3 billion, rising by 16.1%. Notably, the increased expenditures do not come from broadcasters, whose relevance continues to diminish year-by-year. In fact, the private broadcasters (led by Bell) now contribute only 11% of the total financing for English-language television production. The increasing irrelevance of private broadcasters for financing Canadian television production is particularly pronounced in the fiction genre (ie. scripted programming) with private broadcasters only contributing $59 million or five percent of the total. By comparison, foreign financing was $285 million.

Proponents of Netflix taxes or regulation claim that the emergence of unregulated streaming services such as Netflix will mean less money to support to Canadian productions. Minister Joly appears to have joined that chorus despite the fact that her own department acknowledges that Netflix spends more on English-language scripted programming than Canadian broadcasters without specific regulation or legislated mandates.