While Guilbeault has suggested that these sources post entire articles, this is inaccurate. The reality is that these are merely links to the articles (typically with a headline and sentence or two) that send the users back to the originating site. As Andrew Coyne noted in his excellent column on this issue, not only do media organizations benefit from the free referrals, but they actively encourage their users to post links, including widgets to do so at the bottom of every article. In fact, a review of how Canadian media organizations interact with Facebook demonstrates that it goes well beyond just encouraging linking or sharing on their sites.

I recently used the CrowdTangle Chrome extension offered by Facebook to gain a better understanding of how the social media engagement works for Canadian news articles. This post – the first of several on point – looks at a single article. I started with the Toronto Star’s coverage of last month’s Speech from the Throne, particularly an article on the promise to make tech giants pay. The article was notable for opening with the following sentence:

The federal throne speech offered a good news nugget for Canada’s media industry, after a long and costly struggle against content-poaching tech giants.

So what kind of tech giant “content-poaching” took place for this article? 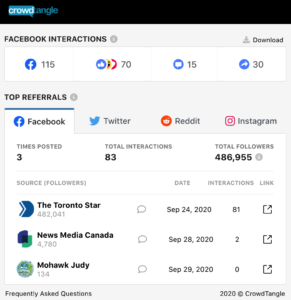 It turns out that virtually all the public engagement with the article – comments, likes or sharing of the article – came from a Facebook post that the Toronto Star posted itself.  Of 83 public interactions (the larger number of 115 interactions including private likes or comments that are not publicly available), 81 came from the Toronto Star post. In fact, there were only two other posts of the Star article: one from News Media Canada (the lead lobby group on this issue) that generated two interactions and one from a user named Mohawk Judy, whose post did not generate any further interactions. The identical article also appeared in the Peterborough Examiner, which is owned by the Torstar. The CrowdTangle data indicates that the Peterborough Examiner itself posted a link to the article twice on Facebook, generating a total of five interactions. There were no other posts.

In short, there was no content-poaching here. Rather, the Toronto Star and the Peterborough Examiner posted multiple links themselves on Facebook and virtually all the resulting public engagement came from their posts. There were practically no other postings nor any posting of the article in full. From a legal perspective, the content actually is licensed since the Toronto Star grants Facebook a licence to host and distribute the content as part of its terms of service:

Specifically, when you share, post, or upload content that is covered by intellectual property rights on or in connection with our Products, you grant us a non-exclusive, transferable, sub-licensable, royalty-free, and worldwide license to host, use, distribute, modify, run, copy, publicly perform or display, translate, and create derivative works of your content (consistent with your privacy and application settings). This means, for example, that if you share a photo on Facebook, you give us permission to store, copy, and share it with others (again, consistent with your settings) such as service providers that support our service or other Facebook Products you use.This license will end when your content is deleted from our systems.

The media organizations actively encourage users to link to their articles on Facebook for the obvious reason that it increases traffic to their site and thereby generates ad revenue. Facebook does not charge a referral fee, a posting fee or any other fee in connection with the display of links to the newspaper article. Yet according to Guilbeault, these links (which are often licensed through the terms of service) are somehow immoral and merit a mandated licensing requirement. If enacted, the government would be establishing a regime that would grant news organizations guaranteed payments for their own posts, which helps explain why Facebook has indicated that they are likely to simply stop the linking altogether.