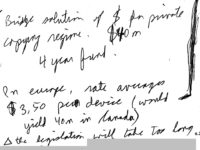 The Canadian government announced yesterday that it will use its regulation-making power to block the attempt to apply the private copying levy to MicroSD cards. I noted last November that it had this power to stop a Copyright Board hearing into the matter and that the Canadian Private Copying Collective […]

The Wire Report reports that a coalition of telecom and technology companies that includes Telus and RIM have written to Canadian Heritage Minister James Moore and Industry Minister Christian Paradis to ask that cabinet implement a regulation to exempt the memory cards from the private copying levy. The Copyright Act gives cabinet the right to issue such exemptions. I wrote about this issue last November, asking whether the government would be willing to step in.

Interestingly, the article quotes David Basskin of the Canadian Private Copying Collective, who says that it would be unfair for the government to stop the process before the Copyright Board of Canada has heard the case. Basskin states “it’s manifestly unfair. We have a solid case to make, and we look forward to making it. The matter is, as you might say, ‘before the courts.’ The Copyright Board has the power of a court.”

The Canadian Private Copying Collective has issued a release saying that it has no plans to seek a levy on cloud-based music services. The CPCC says the services are viewed as licensed services, not private copying (though neither the Google nor Amazon services are currently licensed).  The announcement vindicates Canadian […]

The Wire Report reports that the Retail Council of Canada is calling on the government to scrap the private copying levy in the aftermath of the CPCC demand to create a levy on memory cards. The CPCC’s David Basskin argues eliminating the levy would “recriminalize making private copies” but that […]