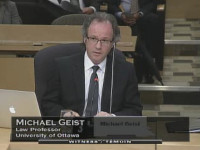 The House of Commons engaged in an extensive debate on privacy yesterday in response to an NDP motion that would require the government to disclose the number of warrantless disclosures made by telecom companies. I’ll have more on the debate shortly (it’s worth reading), but the government has made it clear that it will not be supporting the motion.

My weekly technology law column (Toronto Star version, homepage version) notes that the revelations of massive telecom and Internet provider disclosures of subscriber information generated a political firestorm with pointed questions to Prime Minister Stephen Harper in the House of Commons about how the government and law enforcement agencies could file more than a million requests for Canadian subscriber information in a single year.

The shocking numbers come directly from the telecom industry after years of keeping their disclosure practices shielded from public view. They reveal that Canadian telecom and Internet providers are asked to disclose basic subscriber information every 27 seconds. In 2011, that added up to 1,193,630 requests, the majority of which were not accompanied by a warrant or court order. The data indicates that telecom and Internet providers gave the government what it wanted – three providers alone disclosed information from 785,000 customer accounts.

The issue is likely to continue to attract attention, particularly since the government is seeking to expand the warrantless disclosure framework in Bill C-13 (the lawful access bill) and Bill S-4 (the Digital Privacy Act).