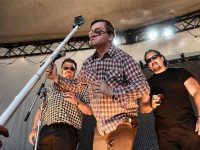 Race to the Bottom: Why Government Tax Credits For Film and TV Production Don’t Pay

The Nova Scotia government has been embroiled in a high profile controversy for the past week following its decision to slash tax credits available to film and television production in the province. The decision sparked an immediate backlash from the industry, which staged a major protest last Wednesday across from the legislature in Halifax.

My weekly technology law column (Toronto Star version, homepage version) notes that the widespread use of film and television production tax subsidies dates back more than two decades as states and provinces used them to lure productions with the promise of new jobs and increased economic activity. The proliferation of subsidies and tax credits created a race to the bottom, where ever-increasing incentives were required to distinguish one province or state from the other.

The leaked comprehensive ACTA draft reveals that a proposed anti-camcording provision has failed to receive significant support.  Proposed by the U.S. and Japan, the provision states: Each Party shall provide for criminal procedures and penalties to be applied [Japan: in accordance with its laws and regulations,] against any person who, […]

A Montreal man has been sentenced to 2 1/2 months in jail for unauthorized recording and distribution of movies.

CP reports on declining numbers of illegal camcords being traced to Canada with some claiming that it is a result of new anti-camcording legislation.

Cinema Guzzo, a Montreal-based theatre chain, has been ordered to pay $10,000 in damages arising from the search of a patron's bag that violated their privacy rights.  The lawsuit over the "abusive search" was first filed in July 2007.  While this case has nothing to do with copyright, how long […]