Did you consent to your involvement in this process? by Quinn Dombrowski (CC BY-SA 2.0) https://flic.kr/p/6Ghzp2 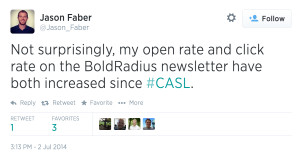 BoldRadius is one of those SMEs that is supposed to be having problems with CASL, despite legal obligations to obtain consents and meet other requirements that have been in effect since 2004. Yet Faber’s initial experience is precisely what one might expect: as companies shift to opt-in lists with customers who explicitly consent to receive messages, they are more likely to open the emails and to click on the links. I asked Faber about the experience to date and he indicated that the company’s list has unsurprisingly slimmed down, but that it is much more qualified, will grow back over time, and offers a more engaged audience, which he prefers. A useful reminder that successful email marketing and opt-in consent are not incompatible. Indeed, opt-in is the standard in most countries around the world and was the unanimous recommendation of the Canadian National Task Force on Spam that included representatives from the marketing community.