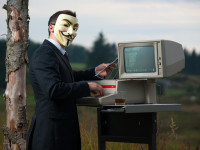 The Standing Senate Committee on Legal and Constitutional Affairs began its hearings on Bill C-13, the lawful access/cyberbullying bill last week with an appearance from several law enforcement representatives. The Ontario Provincial Police was part of the law enforcement panel and was asked by Senator Tom McInnis, a Conservative Senator from Nova Scotia, about what other laws are needed to address cyberbullying. Scott Naylor of the OPP responded (official transcript not yet posted online):

If the bag was open and I could do anything, the biggest problem that I see in the world of child sexual exploitation is anonymity on the Internet. When we get our driver’s licence we’re required to get our picture taken for identification.  When you get a mortgage you have to sign and provide identification.  When you sign up for the Internet, there is absolutely no requirement for any kind of non-anonymity qualifier.  There are a lot of people who are hiding behind the Internet to do all kinds of crime, including cybercrime, fraud, sexual exploitation and things along those lines.

The Internet is moving so quickly that law enforcement cannot keep up.  If there were one thing that I would ask for discussion on is that there has to be some mechanism of accountability for you to sign on to an Internet account that makes it like a digital fingerprint that identifies it to you sitting behind the computer or something at that time.  There are mechanisms to do it, but the Internet is so big and so vast at this point, and it’s worldwide, I’m not sure how that could happen, but that would certainly assist everybody.  In that way I can make a digital qualification that that’s the person that I’m talking to.  If I had one choice, that’s what I would ask for.