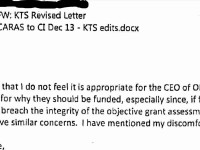 The Canadian music industry gathered in Calgary last weekend for the Juno Awards, the industry’s biggest awards gala that has grown into a week-long event. While the award show is the public face of the Junos, behind the scenes are years of negotiations with governments to provide millions in public funding.

With Ontario hosting the Junos twice in three years – Hamilton hosted in 2015 and Ottawa is slated to host in 2017 – the provincial Liberal government has committed to enormous taxpayer support. My weekly technology law column (Toronto Star version, homepage version) reports that according to internal documents recently obtained under the provincial access to information laws, that funding has sparked concerns within government departments due to the mushrooming budgets, inflated claims about the economic impact of the awards, and what officials have described as a “breach [of] the integrity of the objective grant assessment process.”

Earlier this year, I wrote about the problems associated with the Ontario Music Fund (OMF), the provincial government’s flagship funding program for the music industry. The fund, which is administered by the Ontario Media Development Corporation (OMDC), has doled out nearly $30 million in two years despite little public transparency on how the money has been spent and questionable claims about job creation.