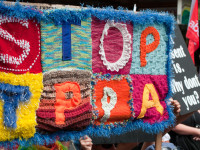 Supporters of the TPP have been at pains to argue that the agreement is largely business as usual, reflecting standards and approaches that are already commonly found in existing Canadian law and agreements. Yet according to a document obtained under the Access to Information Act, that is not how government officials describe the TPP in their own analysis. Internal analysis drafted in late August 2015 shows officials described the IP chapter as covering “a much broader scope of issues than any recent Canadian FTA” and noting that the TPP goes beyond agreements such as TRIPS and NAFTA.

Indeed, here is how the IP chapter was described by Canadian officials weeks before an agreement was formally concluded: