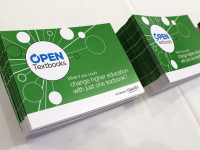 Fictional Claims: Why Kids Are Not Suffering With Canada’s Copyright Fair Dealing Rules

In recent weeks, there has been some media coverage claiming that Canadian educational materials are disappearing in the face of copyright fair dealing rules. For example, several weeks ago, Globe and Mail writer Kate Taylor wrote a column on copyright featuring the incendiary headline that “Kids Will Suffer if Canada’s Copyright Legislation Doesn’t Change.” This week, the CBC provided coverage of a writer’s conference panel with a piece titled “Copyright-free material edging out Canadian texts” that speaks of sales falling off a cliff.

These articles are the latest shots in the battle launched by Canadian publisher and writer groups against fair dealing. The campaign includes regular meetings with Members of Parliament from all parties (speak to almost any MP and they will tell you that they have heard horror stories about Canadian copyright), international letter writing campaigns, and commissioned studies that feature unsubstantiated claims about the state of licensing revenues in Canada (the PWC study comes with the caveat that “we provide no opinion, attestation or other form of assurance with respect to the results of this Assessment”).

While there have been some notable responses from people such as Meera Nair, many copyright watchers have remained largely silent, perhaps assuming that the reliance on false rhetoric will fail to find an audience. It is true that the claims have fallen flat with key independent decision makers such as the Supreme Court of Canada, the Copyright Board of Canada, and the Australian government’s Productivity Commission, but the persistent rhetoric could lead to an inaccurate view of Canadian copyright just as a review of the law is planned for 2017.