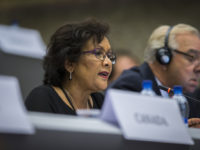 Politicians are sometimes said to struggle with “developing policy at Internet speed,” but Thursday the government gave new meaning to the words. My Globe and Mail op-ed notes that as Liberal MPs were presenting the much-anticipated Standing Committee on Canadian Heritage report on media that included a recommendation for a 5-per-cent tax on broadband access, Prime Minister Justin Trudeau and Canadian Heritage Minister Mélanie Joly were assuring Canadians that the government had no intention of accepting the committee’s proposal.

Ms. Joly left the door open to an Internet tax last year through her national consultation on Canadian content in a digital world, steadfastly refusing to take a firm position on the issue. The committee report effectively ended the debate as the immediate criticism of the ill-advised policy measure means that an Internet tax has about as much future as a dial-up modem.