Further, Brock University’s Interim Provost and Vice-President, Academic wrote to the CRTC to remove any doubt that the submission did not represent the views of the university:

The submission of the Vice-President, Administration to the CRTC does not represent an official position or the totality of opinions at Brock University.

So how did the Vice-President, Academic come to submit to the CRTC and who did he consult? Given the role Bell played in the FairPlay coalition, it will not surprise to find that Bell Media was behind lobbying for the letter. According to documents obtained under provincial access to information laws, Mark Milliere, TSN’s Senior Vice President and General Manager (part of Bell Media) connected with Hutchings in early March with the assistance of Ryerson University professor Cheri Bradish, a former Brock professor. 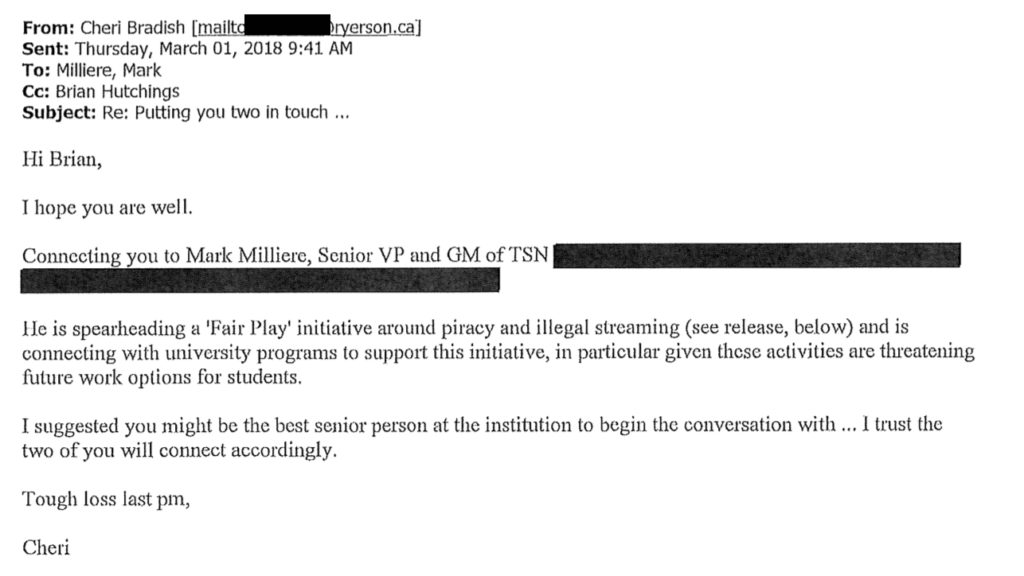 Milliere followed up a phone call with a letter to Hutchings, reminding him of TSN’s history of hiring Brock University grads and supporting its curriculum in asking for a letter of support to the CRTC:

Milliere attached a letter of support filed from Ryerson University and asked that a copy of the Brock letter on Brock letterhead be provided to Bell. The request points to a clear Bell strategy of obtaining support letters to shop around to other potential targets as the Ryerson letter was not public at the time and only filed nearly a week after the Hutchings letter.

On March 22nd, Milliere followed up with another email, asking whether Brock was able to write a support letter and inaccurately stating that the deadline for submissions was the next day.

Hours later, Hutchings filed the submission with the CRTC. The access package suggests that there was no consultation within Brock or review by other parties. Milliere responded the following day with thanks, noting that “if you need anything from TSN, just ask.”

Bell thanks email, obtained under FIPPA from Brock University

Given its other astroturfing efforts with its own employees, the Bell backroom pressure on universities is not particularly surprising. However, the documents confirm that the source of the largely discredited submission was Bell outreach (notably, Bell’s contacts at Brock were so limited that introductions from another university were needed). Further, had Bell not given a false deadline date to spur action (the original Bell letter included the correct submission deadline), it is entirely possible that the submission would have come on the final day, thereby eliminating the opportunity for other Brock executives and faculty to correct the public record.

The pressure at Brock was presumably mirrored at other organizations, confirming yet again the the FairPlay “coalition” was a Bell-led initiative and raising the question of which supportive interventions were the direct result of Bell outreach to business partners, grant recipients, or others beholden to Canada’s largest communications company.