Last week, News Media Canada, the lobby group representing the major Canadian news media publishers, released a report calling for the creation of a government digital media regulatory agency that would have the power to establish mandated payments for linking to news articles on social media site, establish what content is prioritized on those sites, and potentially issue fines in the hundreds of millions of dollars. As I noted in my review of the report, it inaccurately describes the proposed Australian approach upon which it is modelled, avoids acknowledging that payments would be for links, and would open the door to hundreds of millions on tariff retaliation by the US under the USMCA.

The full scope of the Postmedia lobbying campaign is remarkable. The same front page story that appeared in the National Post also appeared in ten additional papers. But even more notable was the emphasis on posting the article to Facebook, where Postmedia’s various Facebook pages posted a link to the article an astonishing 21 times.

As for impact, consider data from CrowdTangle. As noted above, Postmedia posted the original National Post article 11 times on Facebook. 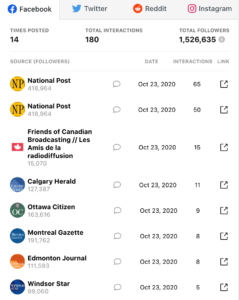 In sum for the the 21 Facebook posts, Postmedia garnered only five additional public posts and a total of 88 shares or just over four shares per post.

Some of Canada’s smaller news publishers who are members in News Media Canada were also active in promoting the release. For example, the Telegraph-Journal, part of the Brunswick News group, ran a two op-eds (and one from Jerry Dias) in support of the report (both of which were posted to Facebook). The Abbotsford News, part of the Black Press group, covered the report (and posted to Facebook). There were some exceptions: the Globe and Mail ran one story without posting it to Facebook as did Le Devoir.

What is notable about the self-interested media campaign is not just the power of large Canadian publishers to re-use the same coverage in markets across Canada both big and small, but that under  their proposal, they argue that Facebook should be required to pay them for including links to their articles that they themselves have posted. In fact, the lobby group also demands that their original content should be prioritized on Facebook (with a regulator to determine what is entitled to priority), even though the same, original content is repeated again and again across multiple papers and in dozens of Facebook posts. Canadian Heritage Minister has described Facebook as “immoral” for linking to content without payment, but in light of what actually takes place, the comment might be better directed at lobbying campaigns that demand payments for content that the media lobby posts itself to social media.