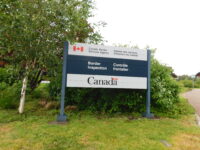 The Law Bytes Podcast, Episode 133: Michael Nesbitt on How the Senate Pushed Back Against a Government Bill on Searching Digital Devices at the Border

It isn’t every day that a Senate committee examines legislation and makes notable changes against the wishes of the government. But that’s what happened last month as a Senate committee reviewed Bill S-7, which raised significant privacy concerns regarding the legal standard for searches of digital devices at the border. A chorus of opposition sparked by Senator Paula Simons led to changes in the bill with the Chair of the committee acknowledging “we did not have one witness except the minister and the officials say that the new standard was a good idea.”

University of Calgary law professor Michael Nesbitt, who teaches and researches in the areas of criminal and national security law, appeared before the committee to argue against the government’s proposed approach. He joins the Law Bytes podcast to talk about the bill, the change at the Senate, and what lies ahead as the bill moves to the House of Commons in the fall.