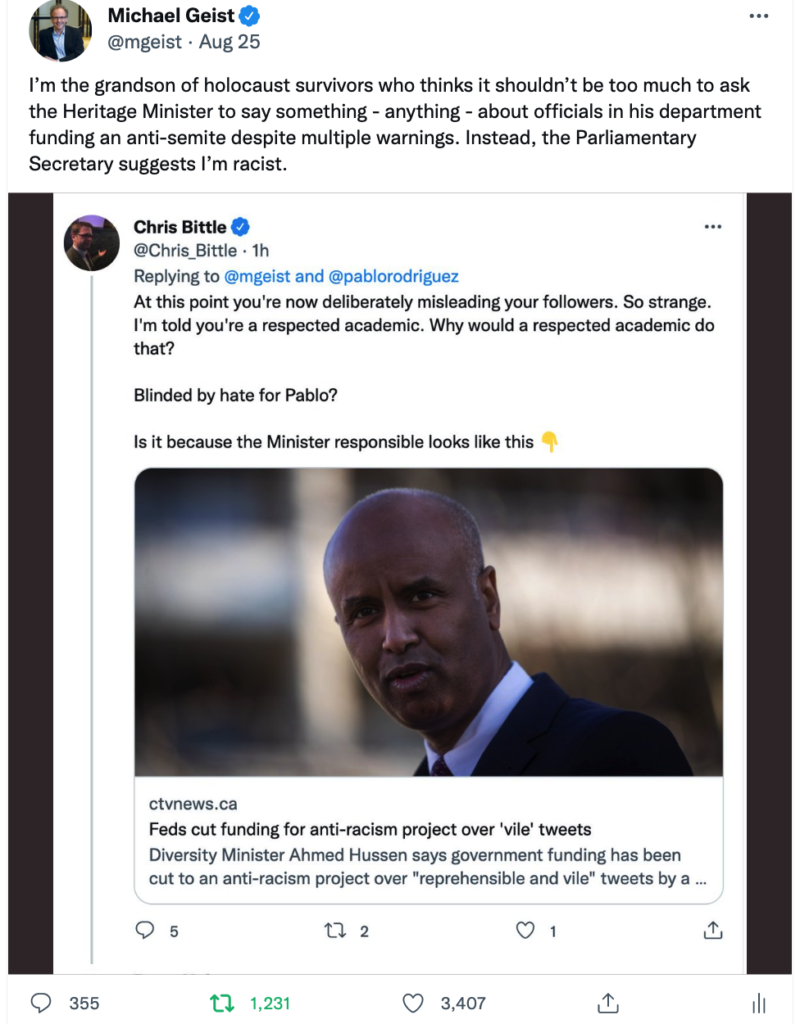 For those that have missed the controversy over the past few weeks, persistent, important work from Mark Goldberg – amplified by Jonathan Kay – brought to light that Canadian Heritage was supporting a known anti-semite with a long history of anti-semitic comments and posts. These posts were openly available online and should have been part of any routine due diligence. Moreover, Goldberg regularly tweeted at the department and Rodriguez to try to get attention. However, the department ignored or failed to find the evidence, agreeing to pay $133,800 to the Community Media Advocacy Centre (CMAC), led by Laith Marouf, to develop an anti-racism strategy for Canadian broadcasting. The issue attracted international attention, yet many Canadian leaders have been strangely silent about it.

In my view, the government – led by Minister of Housing and Diversity and Inclusion Ahmed Hussen and Canadian Heritage Minister Pablo Rodriguez – have failed to take full responsibility for the CMAC case. Failing to properly vet CMAC and Marouf is bad enough, yet ignoring repeated warnings is inexcusable. Further, doing nothing for weeks after Liberal MP Anthony Housefather raised concerns makes one wonder if the desire was to ignore the issue in the hope that it might fade from public view.

Minister Hussen’s first public response as the issue started to garner public attention did not take action, only promising that he would work to “rectify this matter immediately.” When that proved insufficient, Hussen proceeded to announce that funding had been cut. But rather than making it clear that the government would investigate how it had failed, his announcement bizarrely called on CMAC to do the investigating:

We call on CMAC, an organization claiming to fight racism and hate in Canada, to answer how they came to hire Laith Marouf, and how they plan on rectifying the situation given the nature of his antisemitic and xenophobic statements.

The near complete silence from virtually the entire Liberal caucus is another massive failure of responsibility. The most vocal Liberal MP has been Housefather, who as noted raised concerns with Minister Hussen weeks before the issue took off but was seemingly ignored. Housefather was dissatisfied with the government’s response, publicly calling for hearings into the issue to better understand what went wrong with the Canadian Heritage vetting process and stating that Canadian Heritage needed to accept responsibility. Toronto-area MP Ya’ara Saks also spoke out, but two Jewish MPs (eventually alongside Minister Hussen and perhaps others that did not garner much attention) isn’t nearly good enough.

[Update: A reader points out the Prime Minister Trudeau was asked in a press conference about the issue on August 22nd. He called the comments reprehensible but made no commitment to an internal investigation or committee hearing. His office has not offered any pro-active statement on the issue.]

[Update 8/30: Liberal MP Taleeb Noormohamed writes that he tweeted against CMAC last week in response to a question from a constituent.]

Indeed, that short list terrifies me. If we are honest about it, we know that on many comparable issues, the Prime Minister, cabinet ministers, and MPs would be rightly rushing to add their voices to the public concern. I’m happy that leaders are willing to speak out against racism or wrongful conduct as their voices have power.  But it leaves me dismayed that somehow a case of government funding an anti-semite did not spark the same reaction. If it falls predominantly to the Jewish MPs to speak out, the message in the silence from Pablo Rodriguez and many other cabinet ministers is that anti-semitism is a Jewish problem, not a broader societal concern. The failure to take responsibility by speaking out in this case by providing assurances that the government will investigate itself to ensure this does not happen again should not be ignored or soon be forgotten.

Neither, for that matter, should the actions of Chris Bittle, who took it upon himself to actively defend the Rodriguez non-response, arguing that it wasn’t “his file.” I think anti-semitism should be everyone’s file and cannot understand an elected official repeatedly arguing that there is no need to say anything. With respect to Rodriguez, it is obvious that this is part of his “file”: he tweeted about an anti-semitism roundtable sponsored by his department days before the issue blew up, he was the architect of the entire government anti-hate strategy, there are questions about CRTC funding for CMAC which is his responsibility, the specific CMAC program was purportedly about broadcasting which is his responsibility, and he is the Minister of Canadian Heritage, whose officials administer the program and failed to properly vet CMAC.

Indeed, Rodriguez has made online hate a centrepiece of his legislative agenda, yet he seems to be interested only when tech companies are to blame. Once a policy issue becomes more complex, he either ignores it (as is the case with Bill C-11 and concerns about regulating user content), avoids discussing it (as is the case with Bill C-18, where he cut off debate before ever giving a speech on the bill), or treats it as outside his responsibility (as he is doing now with the anti-hate program).

Is there any reasonable justification for his total silence even in the face of multiple calls for him to say something? According to Bittle, even the suggestion that Rodriguez should say something and pointing to his connections to the issue was enough to drive him to anger, sparking his incredibly offensive tweet in which he suggested that the reasons for my tweet must either be hatred of Rodriguez or of a person of colour.

I will leave it to others to decide for themselves if they believe this justification, which was included in his tweet apology (there was no direct apology). I’m glad that Bittle now admits his tweet was “unfounded and inappropriate”, yet note that there are no obvious consequences to his hurtful and damaging comments. Bittle’s aggressive posture at the Heritage committee often focuses on his belief that the tech companies have failed to take responsibility for harmful speech on their platforms, yet ironically last week he became the source of the harmful speech he claims to want to stop. If the government is to go beyond virtue signalling on these issues, that conduct should not be tolerated and leaders such as Pablo Rodriguez must recognize that their ongoing silence in providing assurances that they will take action is sending a deeply disturbing message that anti-semitism does not merit the same response as other forms of hate.