Mediacaster posts the questions pertaining to ISPs that have been posed as part of the forthcoming copyright consultation. These include notice-and-takedown, ISP liability, and a making available right. The full consultation launches on Monday.

The Forthcoming Copyright Consultation – An Update

CBC and Billboard provide some additional coverage of the copyright consultation to be announced next week.  Word is that the roundtables will begin immediately with at least two planned next week in Vancouver and Calgary with more to follow across the country.  The first is apparently scheduled for the Vancouver […]

Late this afternoon, Marc Garneau, the Liberal Industry critic, contacted me to respond to my post today on the Liberal dissenting recommendation to introduce copyright legislation and ratify the WIPO Internet treaties in the Industry Committee report on the Canadian economy.  The following notes on the call are posted with […]

A week after the Liberal Party came out in favour of net neutrality, David Akin notes that Liberal members of the Standing Committee on Industry recently issued a dissenting recommendation focused on copyright reform.  The recommendation was part of a report on the Canadian economy.  While the committee as a […] 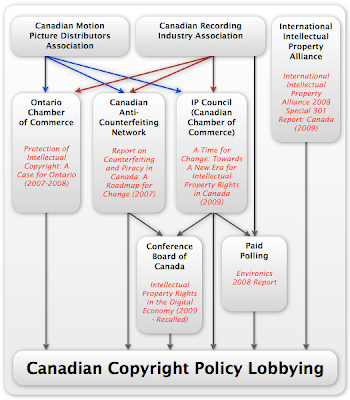 The Conference Board of Canada plagiarism and undue influence story – which with the Board's report and overdue apology to Curtis Cook will now go on hiatus until new reports are issued in the fall – has obviously attracted considerable interest.  Looking back, while plagiarism is rare, it is the public airing of the copyright lobby policy laundering effort that is the far more important development.