IQ Sensato reports on the latest review of progress on the WIPO Development Agenda.

The ACTA Threat to the Future of WIPO

When the Anti-Counterfeiting Trade Agreement was first announced in October 2007, my first blog posting on the issue was titled Is ACTA the New WIPO?.  I return to that theme in an opinion piece just published by the Swiss-based Intellectual Property Watch.  While the first part of the piece focuses on the ACTA transparency issues, the second half discusses the short and longer-term implications for the developing world and the World Intellectual Property Organization.  I note:

In the short-term, WIPO members can expect progress on Development Agenda issues to stall as ACTA partners focus on completing their treaty. Given the scepticism surrounding the Development Agenda harboured by some ACTA countries, they may be less willing to promote the Agenda since their chief global policy priorities now occur outside of WIPO.

The longer-term implications are even more significant. While it seems odd to conclude an anti-counterfeiting treaty without the participation of the countries most often identified as the sources or targets of counterfeiting activities, the ACTA member countries will undoubtedly work quickly to establish the treaty as a "global standard." Non-member countries will face great pressure to adhere to the treaty or to implement its provisions within their domestic laws, particularly as part of bilateral or multilateral trade negotiations. In other words, there will be a concerted effort to transform a plurilateral agreement into a multilateral one, though only the original negotiating partners will have had input into the content of the treaty.

Given these possibilities, I argue that the best course of action is for the developing world to demand a seat at the ACTA table.  In doing so, it would in fact turn the plurilateral negotiations into a multilateral one and thereby ensure that the ACTA better reflects the interests and concerns of the global community.  In particular:

Bannerman on Canada and the WIPO Development Agenda

Sara Bannerman has posted her latest article examining the Canadian position at WIPO on the Development Agenda. 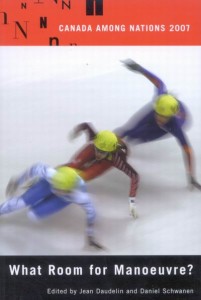 Together with my colleague Jeremy deBeer, I recently contributed an essay titled Developing Canada’s Intellectual Property Agenda to the annual Canada Among Nations (2007).  Our article, which is available online in PDF or via SSRN, argues that Canada should lead by example on intellectual property by adopting flexible, balanced policies […]

Sara Bannerman and IP Watch with updates on the development agenda talks, while Howard Knopf has coverage of the Canadian position leading into this week's Broadcast Treaty talks. Update: EFF features an excellent summary of the new WIPO Development Agenda.