Rogers’ executive Rob Bruce in 2012 on changes to Canadian foreign investment rules that removed restrictions for companies with less than ten percent of the market: â€œOur view is ‘bring it on. As far as competition goes, we’ve always been a full-speed-ahead competitor and we’re ready to go with whoever […]

Industry Minister Christian Paradis was in the news this week (Globe, Post, Cartt.ca) urging foreign telecom companies to consider investing in the Canadian market in order to beef up the competitive environment. Paradis is right to court the big foreign players, who would bring capital, buying power that the current Canadian carriers can’t match (potentially leading to better deals on devices), and the ability to leverage their global networks to offer better roaming rates. Foreign telecom companies should view the Canadian market as attractive, given some of the highest ARPU (average revenue per user) rates in the world (see CRTC Figure 6.1.9). Yet they will likely give Canada a pass due in part to failed government policies. These include: 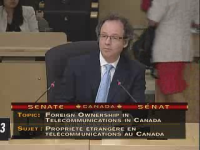 The Senate Committee on Transport and Communications is conducting a pre-study on the changes to the Telecommunications Act contained in Bill C-38, the omnibus budget implementation bill. Last week, the committee heard from Industry Minister Christian Paradis and from the CRTC. This morning, I’ll appear before the committee to speak in support of removing the telecom foreign ownership restrictions.  My planned opening remarks:

The Globe and Mail has a masthead editorial calling on the government to drop foreign investment restrictions on telecommunications.

No Cap on UBB Reading: Lots of Coverage of Caps and Competition

The current controversy over usage based billing, the CRTC, and Internet data caps has generated a wide range of commentary and articles over the past few days.  These include: Clearing Up the Confusion Over the Caps, a column version of my post on usage based billing and the impact on […]