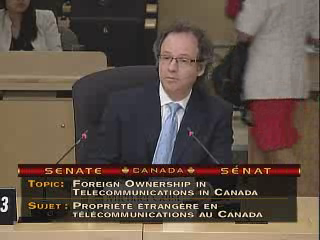 I appeared before the the Senate Committee on Transport and Communications
June 5, 2012 to discuss the effect of Bill C-38 on foreign ownership restrictions in the Telecommunications Act.

Appearance before the Senate Committee on Transport and Communications June 5, 2012

Good morning.  My name is Michael Geist.  I am a law professor at the University of Ottawa, where I hold the Canada Research Chair in Internet and E-commerce Law. I am also a syndicated weekly columnist on law and technology issues for the Toronto Star and the Ottawa Citizen. I appear before this committee today in a personal capacity representing only my own views.

Bill C-38 addresses a wide range of issues. I will speak exclusively on the foreign ownership changes to the Telecommunications Act, which implement a February 2012 announcement on the issue. The current foreign investment restrictions will be lifted for any carrier with less than ten per cent market share, which is effectively anyone other than the so-called big three  Bell, Rogers, and Telus. Restrictions remain in place for broadcasters and broadcast distribution companies. There are additional changes to the financing of the do-not-call list that I can address during the discussion.

I am supportive of the changes in Bill C-38, though I think these kinds of legislative changes belong in their own bill, not within omnibus legislation. In fact, I would support an even bolder vision. The government could have shaken up the Canadian market by removing telecom foreign ownership restrictions altogether and considered dropping foreign ownership limits on broadcasters as well.

I base my support for relaxing foreign ownership restrictions on four key factors that I will discuss with these remarks:

1. The Canadian telecom market is uncompetitive relative to other countries resulting in higher costs, less innovation, and limited choice.
2. Canadian rules on telecom foreign ownership are the most restrictive in the developed economy world.
3. There is broad support for change following years of study.
4. Concerns about negative effects are greatly overstated for both telecom and broadcast

The Lack of Competition

Canadian telecommunications networks were once the envy of the world. No longer. While there is some debate on the methodology and validity of the many studies that have compared wireless and broadband networks worldwide, there is no disputing that none rank Canada as a leader in either area.  Indeed, while Canadian broadband networks were once viewed as a global leader – Canada ranked as high as second only a decade ago on some metrics – today it is at best a middle of the pack player with mounting frustration among both consumers and businesses reliant on a world-class digital infrastructure.

For example, last year’s OECD broadband rankings confirmed that Canadians pay more for broadband services than consumers in most other developed countries. The results were unmistakable – Canada remains a laggard when it comes to broadband services with a middling ranking in overall broadband subscriptions and one of the poorest rankings based on price at all the most common speeds. The OECD data covers Canada’s largest ISPs including Bell, Rogers, and Shaw, meaning it accounts for a sizable chunk of the overall subscriber market.

Similarly, last year the ITU released its Measuring the Information Society 2011 report and also found Canada lagging behind. Canada ranked outside the top ten in every indicator and an incredible 111th on mobile subscriptions and 57th on mobile broadband.

Yet another OECD study in 2011 found that Canadians face the highest data roaming costs among all OECD countries, a direct reflection of the lack of competition in the market.

The new entrants into the Canadian marketplace have had a positive impact, but it is only a start and more is needed to bring Canada up to world standards for competitiveness, choice, and costs.
Canada is the Most Restrictive Developed Country in the World for Telecom

I think it is important to place the restrictive Canadian telecom market into perspective.  Earlier this year, the OECD released a major study on foreign direct investment, surveying policies in 55 leading economies around the world, including all developed countries and dozens of emerging and developing countries.

The results should be a wake-up call for Canadians.  Canada was ranked as the second most restrictive market for both communications and mobile telecom in the survey with only China ranking as more restrictive. Viewed in that light, Canada is completely out-of-step with the rest of world, placing us at a significant disadvantage relative to other countries. In a capital-intensive sector that requires major upfront investments, Canadian rules have led to a substantially less competitive marketplace than most other developed countries.  The impact is felt across the economy as less choice and higher costs for communications services hit consumers in the pocketbook and hamstring business reliant on communications technologies and services.

The changes found in Bill C-38 help address this issue, but still do not fully open the market, as is the case in many other developed economies.

As you are likely aware, this issue has been the subject of multiple studies. The 2006 Telecom Policy Review Panel and the 2008 Competition Policy Review Panel recommended changes to the current restrictive regime. Moreover, Industry Canada has consulted the public on the issue of relaxing foreign investment restrictions on in the telecom market. The results of that consultation demonstrated strong support for relaxing the restrictions. The majority of Canadian telecom companies – including Telus, Rogers, MTS Allstream, and SaskTel along with new entrants such as Globalive, Mobilicity, and Public Mobile – all supported changes to the current rules.  Moreover, leading foreign telecom companies, including AT&T and Verizon, supported changes, suggesting that there may be foreign interest in the Canadian market. Supportive businesses pointed to the benefits from increased access to capital, greater investment and innovation in the Canadian market, and the potential for greater competition. It should be noted that consumer groups such as the Public Interest Advocacy Centre have also expressed support for changes to the current rules.
Concerns Are Overstated, Part One – Telecom

Those expressing opposition to relaxing the rules fall into two groups.  The first group is largely a group of one – Bell. Bell argued that opening the market was a “solution in search of problem”, an unsurprising position for a company that has consistently taken issue with the steady stream of studies that find Canada a laggard on telecom competitiveness.

I would argue that concerns regarding security risks or employment impact due to foreign investment changes are overstated. The days of retaining Canadian control over physical telecommunications infrastructure connected to millions of homes are over. Wireless networks involve significant investments in cellphone towers, but not direct connectedness into individual homes. Further, the notion that Canadian control guarantees Canadian jobs is also part of a by-gone era.  Canadian carriers regularly outsource some of their customer service jobs out of the country.  Meanwhile, other parts of the organization – retail and business sales as well as network building – involve jobs that will remain in Canada regardless of a company’s country-of-origin.  While some head office jobs may be at risk, new companies operating in Canada could potentially create more jobs, not fewer.
Concerns Are Overstated, Part Two – Broadcast

The CRTC’s active involvement in setting Canadian content requirements is a direct result of Canadian-owned broadcasters regularly seeking to limit the amount of Canadian content they are required to broadcast. Producing original Canadian content is simply more expensive than licensing foreign (largely U.S.) content.  These fiscal realities – and the regulations that have arisen as a response – remain true regardless of the nationality of the broadcaster.

Foreign owned businesses face Canadian-specific regulations all the time – provincial regulations, tax laws, environmental rules, or financial reporting – and there is little evidence that Canadian businesses are more likely to comply with the law than foreign operators.  Cultural businesses may raise particular sensitivities, but broadcasters that are dependent upon licensing from a national regulator can ill-afford to put that licence at risk by violating its terms or national law.

In summary, while I am uncomfortable with the manner in which these changes are being enacted, I think relaxing foreign ownership restrictions in the telecom market is a change that is long overdue. In fact, I think the government could – and likely should – have been even more aggressive in trying to increase the competitiveness of the Canadian communications sector.