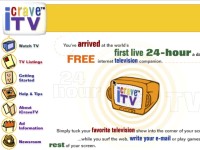 The Ghost of iCraveTV?: The CRTC Asks Bell For Answers About Its Mobile TV Service in Net Neutrality Case

Before there was Youtube, Hulu, Netflix, and broadcasters streaming their content on the Internet, there was iCraveTV.  iCraveTV, a Canadian-based start-up, launched in November 1999, by streaming 17 over-the-air television channels on the Internet.  The picture was small, connection speeds were slow, but the service was streaming real-time television years before it became commonplace. The company relied upon two Canadian laws to provide the service: the Copyright Act, which contains a provision permitting retransmission of broadcast signals subject to certain conditions, and the CRTC’s New Media Exemption order, which excluded new media broadcasters from regulation.

The company faced an immediate legal fight from Hollywood and broadcasters. Within months of launching, the service shut down. U.S. demands for Canadian law reform ultimately led to changes to the Copyright Act, which effectively excluded “new media retransmitters” from taking advantage of the retransmission provision.

iCraveTV is long forgotten for most Internet users, but the legal framework that ultimately emerged was invoked this week by the CRTC in Canada’s leading net neutrality case.