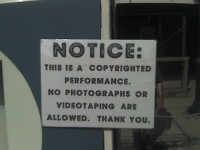 Canada’s new copyright notice-and-notice system has been in place for less than a week, but rights holders are already exploiting a loophole to send demands for payment citing false legal information. Earlier this week, a Canadian ISP forwarded to me a sample notice it received from Rightscorp on behalf of BMG Rights Management. The notice, which is posted below with identifying information removed, must be forwarded to the subscriber or the ISP faces the possibility of statutory damages of between $5 – 10,000. Rightscorp announced that it was entering the Canadian market last year, so its participation in the notice-and-notice system is not a surprise. What is surprising is that the company has brought its model of issuing demands for payments to Canada by warning of U.S. damage awards and Internet termination in order to stoke fear among Canadians that they could face massive liability if they refuse to pay.

The notice falsely warns that the recipient could be liable for up to $150,000 per infringement when the reality is that Canadian law caps liability for non-commercial infringement at $5,000 for all infringements. The notice also warns that the user’s Internet service could be suspended, yet there is no such provision under Canadian law. Moreover, given the existence of the private copying system (which features levies on blank media such as CDs), personal music downloads may qualify as private copying and therefore be legal in Canada.

In addition to misstating Canadian law, the notice is instructive for what it does not say. While a recipient might fear a lawsuit with huge liability, there is very little likelihood of a lawsuit given that Rightscorp and BMG do not have the personal information of the subscriber. To obtain that information, they would need a court order, which can be a very expensive proposition. Moreover, this is merely an allegation that would need to be proven in court (assuming the rights holder is able to obtain a court order for the subscriber information).