An official launch event for the book is planned for Thursday, June 4th at 4:00 pm at the University of Ottawa. I’ll be part of a panel of contributors to the book discussing their chapters that will also include Craig Forcese, Jonathan Obar, Tamir Israel. The event is free and open to the public. 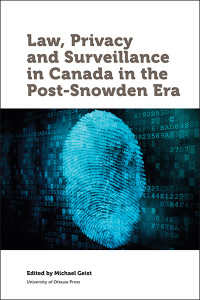 The nine contributions in the book are grouped into three parts: understanding surveillance in Canada, legal issues, and prospects for reform. I’ll write more about the contributions in upcoming posts, but two themes run throughout the book.

The first theme is secrecy. That secrecy is linked to surveillance may seem unsurprising, however secrecy now extends far beyond the specific surveillance programs or activities undertaken by Canada’s surveillance agencies. For example, Canada’s network architecture remains largely shrouded in secrecy, with the lack of domestic Internet exchange points creating a network framework that diverts considerable domestic traffic through the United States.  Moreover, Canada’s legal framework is often hidden behind ministerial authorizations that are not public, judicial decisions that are secret or heavily redacted, and government legal opinions that are privileged and confidential.

The second theme points to serious cracks in the Canadian surveillance law framework.  Contributors point to a myriad of problems with a legal framework that appears ill-suited to address modern day communications networks and privacy expectations. Several contributors raise concerns related to global networks, cross-border information sharing, the legal treatment of metadata, and the efficacy of current oversight mechanisms. As the fault lines become larger, a robust public and political debate is needed. While there is no shortage of potential changes – most authors offer their own recommendations – successfully transitioning toward a reform agenda represents an enormous challenge for all concerned with privacy and surveillance in Canada.