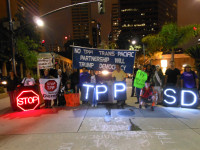 The Trouble with the TPP: My Appearance Before the International Trade Committee

Yesterday I appeared alongside Jim Balsillie, former co-CEO of Research in Motion, at the House of Commons Standing Committee on International Trade public consultation on the TPP. There were some interesting exchanges that I will highlight once the transcript is released. My opening remarks are posted below.

Appearance before the House of Commons Standing Committee on International Trade, May 5, 2016

Good morning. My name is Michael Geist.  I am a law professor at the University of Ottawa, where I hold the Canada Research Chair in Internet and E-commerce Law. I appear today in a personal capacity representing only my own views.

There is lots to say about the TPP – I have written dozens of articles and posts on the agreement and I am currently working on a book on point – but I have limited time so I’ll focus briefly on four issues.