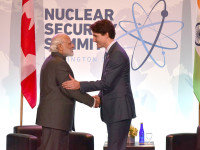 In Search of a Plan B for the TPP

The government’s public consultation on the Trans Pacific Partnership (TPP) has stopped in Vancouver, Calgary, and Montreal in recent weeks as a growing number of people speak out on the agreement. Tens of thousands have also written to the government on the issue with some beginning to consider trade strategy alternatives.

My weekly technology law column (Toronto Star version, homepage version) argues that the interest in other trade options stems from three developments. First, the TPP may not have sufficient support to take effect since under the terms of agreement both Japan and the United States must be among the ratifying countries. Implementation has been delayed in Japan where politicians fear a political backlash and seems increasingly unlikely in the U.S., where the remaining presidential candidates have tried to outdo one another in their opposition to the deal.

Time for Plan B Instead of Trans Pacific Partnership?