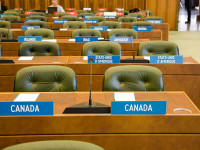 In the decade of lobbying leading up to the reform of Canadian copyright law in 2012, the music industry had one core message: Canada needed to implement and ratify the World Intellectual Property Organization’s Internet treaties. While many education, consumer, and business groups expressed concern that the digital lock rules in the treaties would harm innovation, the music industry was insistent that the WIPO Internet treaties represented an essential component of digital copyright reform. The lobbying campaign was successful as Canada proceeded to implement and ratify the treaties. The legislation is still relatively new, but in a stunning reversal, the head of Music Canada now says that the drafters of the WIPO Internet Treaties were just guessing and suggests that they guessed wrong.

The intensity of the lobbying for the WIPO Internet treaties is difficult to overstate. In 2004, Billboard reported that 26 Canadian industry groups were pressuring the government to ratify the treaties. In 2006, Graham Henderson, president of the Canadian Recording Industry Association (later Music Canada), wrote an op-ed in the National Post titled “Protect Artists: Reform Canada’s Copyright Laws” which argued that: