The reason is not a failure on the part of Canadian media to transition to the internet age, or to meet Canadians’ needs. The reason, adapting the well known trade term, is the ‘dumping’ of advertising inventory into the Canadian marketplace by foreign-based internet conglomerates, which do not contribute the same level of investment, jobs and Canadian content as Canadian media.

The FCB report proceeds to try to make the legal case that these services should not qualify for advertising deductions under Canadian law, going so far as to argue that even the Google Search page should be treated like a “program” within the context of constituting “broadcasting”.  According to the FCB report, these changes would dramatically change the Canadian media landscape:

For Canadian media, it could be the single greatest factor in reversing revenue declines and ensuring viability for Canadian local print, TV and radio operations – and their contributions to Canadian culture, news and democracy. Hundreds of millions of dollars could move back from foreign to Canadian owned-and-controlled media companies – stabilizing and growing their revenues, and allowing these companies to reverse job cuts and re-invest in Canadian content, including journalism.

The Shattered Mirror also places great hope in the benefits of Income Tax Act reform, making it recommendation #1 and claiming that $300 to $400 million is at play.  Instead of hoping that advertising will gravitate to Canadian sources, however, it envisions a ten percent withholding tax on “non-qualifying media”, which would be determined based on meeting a test for either Canadian ownership or a significant Canadian media presence that includes tax payments and meeting minimum thresholds for producing “original civic function journalism aimed primarily at Canadian audiences.”  The report also recommends that the Canadian government only advertise on Canadian qualifying sites and that an exemption be created for small-scale advertisers. It estimates that the withholding tax would generate up to $400 million, which would be allocated toward a fund to support Canadian journalism.

While these reports purport to provide a much desired easy fix to the Canadian media world, the reality is unsurprisingly far more complicated. In the case of the FCB report, some of the legal arguments – Google Search and Facebook as broadcasts? – are very weak and would be unlikely to survive a court challenge.

In fact, this slide from Mary Meeker, the well-known Internet analyst, provides a nice illustration of the close correlation between audience size and advertising. It suggests that these trends will continue, with newspaper advertising likely to continue its decline in favour of mobile based advertising. 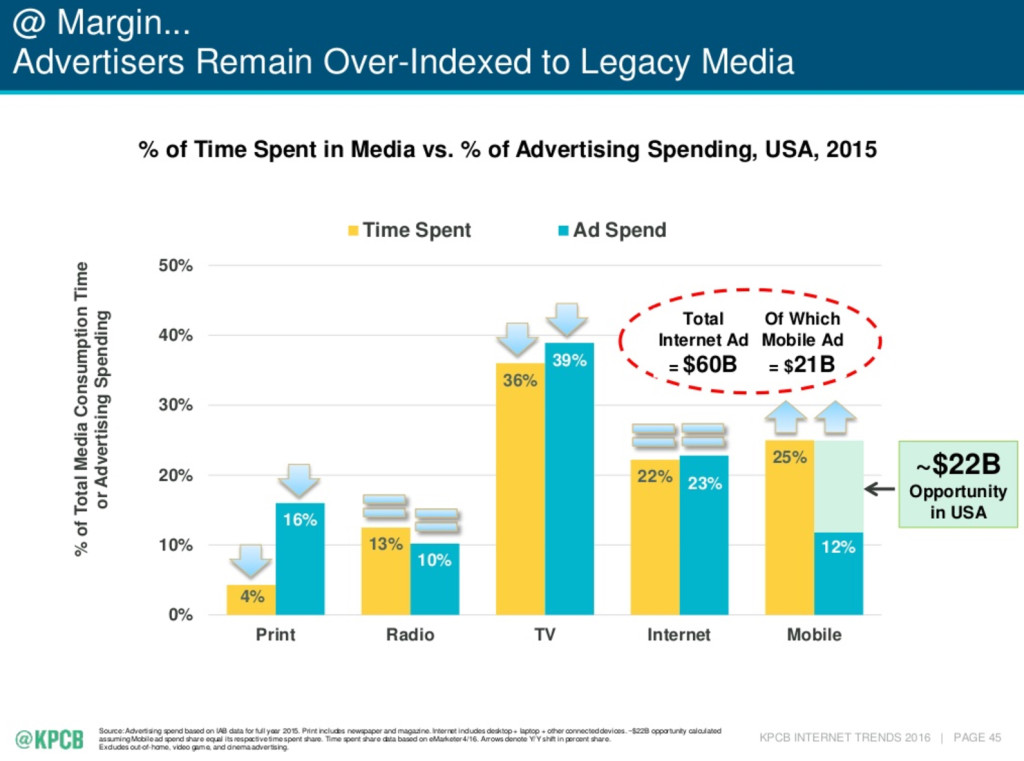 Even more problematic is how both reports miss the complexity associated with digital advertising.  First, a considerable portion of digital advertising with companies such as Google involves a revenue share between Google and the site where the advertising appears. In other words, the advertising often appears on the same Canadian sites that the reports want to support. That revenue initially goes to Google, which then sends the majority back to the site or media organization. For that form of advertising, Google is simply matching advertisers and websites, while collecting a commission for providing the service.  If advertising through the Google or Facebook network alone were enough to disqualify the advertising from tax deductibility, Canadian sites would be harmed in the process.

In cases where the advertising is on a foreign site – think YouTube – there may also be important Canadian connections. For example, the Globe and Mail posts videos on Youtube and generates a revenue share for the advertising that appears alongside the video. That is part of how Canadian media is trying to monetize its content, yet the policies in the reports would discourage such advertising by making it more expensive.  The problem with Canadian content on foreign sites also crops up for Canadian artists and smaller media organizations, who may similarly use foreign sites as important sources of distribution and advertising revenue.

The harm extends to Canadian businesses seeking to reach larger audiences through digital advertising. As Google points out, changing the Income Tax rules would ultimately make it more difficult for small and medium sized business to reach Canadian audiences since they could not easily use existing digital ad networks.

There is a reasonable debate to be had over the dominance of Google and Facebook in the digital advertising sector and over how to fund important investigative journalism. There are some good ideas out there including levying sales taxes on digital providers, opening the door to foundational support, and creating an investigative journalism fund similar to the court challenges program. However, cutting the flow of dollars to Internet giants – particularly where that money often boomerangs back to Canada – will do little to actually help Canadian media organizations seeking to attract digital ad dollars, Canadian artists searching for new revenues online, or Canadians businesses trying to grow through digital advertising.