The Industry committee’s clear assertion this week as the authoritative copyright review is grounded in process since the government gave it sole responsibility for conducting the review. While my earlier posts focus on the process and the unprecedented INDU release, the committee justifiably points out that it also heard from far more witnesses through hearings and briefs than the Heritage committee. In fact, it notes that it heard from the “vast majority of stakeholders who contributed to CHPC’s study.” Working with University of Ottawa student Philip Abraham, we reviewed the witness lists, the brief submissions, and the citations by the committees to better assess claims about which committee best reflects the full spectrum of stakeholder views on copyright. This post examines who participated in the committee work and a follow-up posts will highlight the balance in the witness lists and whether the committees were listening.

The following chart features all the witnesses for the two committees. Where witnesses appeared on behalf of an organization, the organization is listed (multiple organizational witnesses are treated as one). Where the witness appeared in a personal capacity, the individual name is listed. The data in this regard is unequivocal, demonstrating that Industry heard from far more witnesses representing a far wider and deeper range of perspectives from all parts of the country. 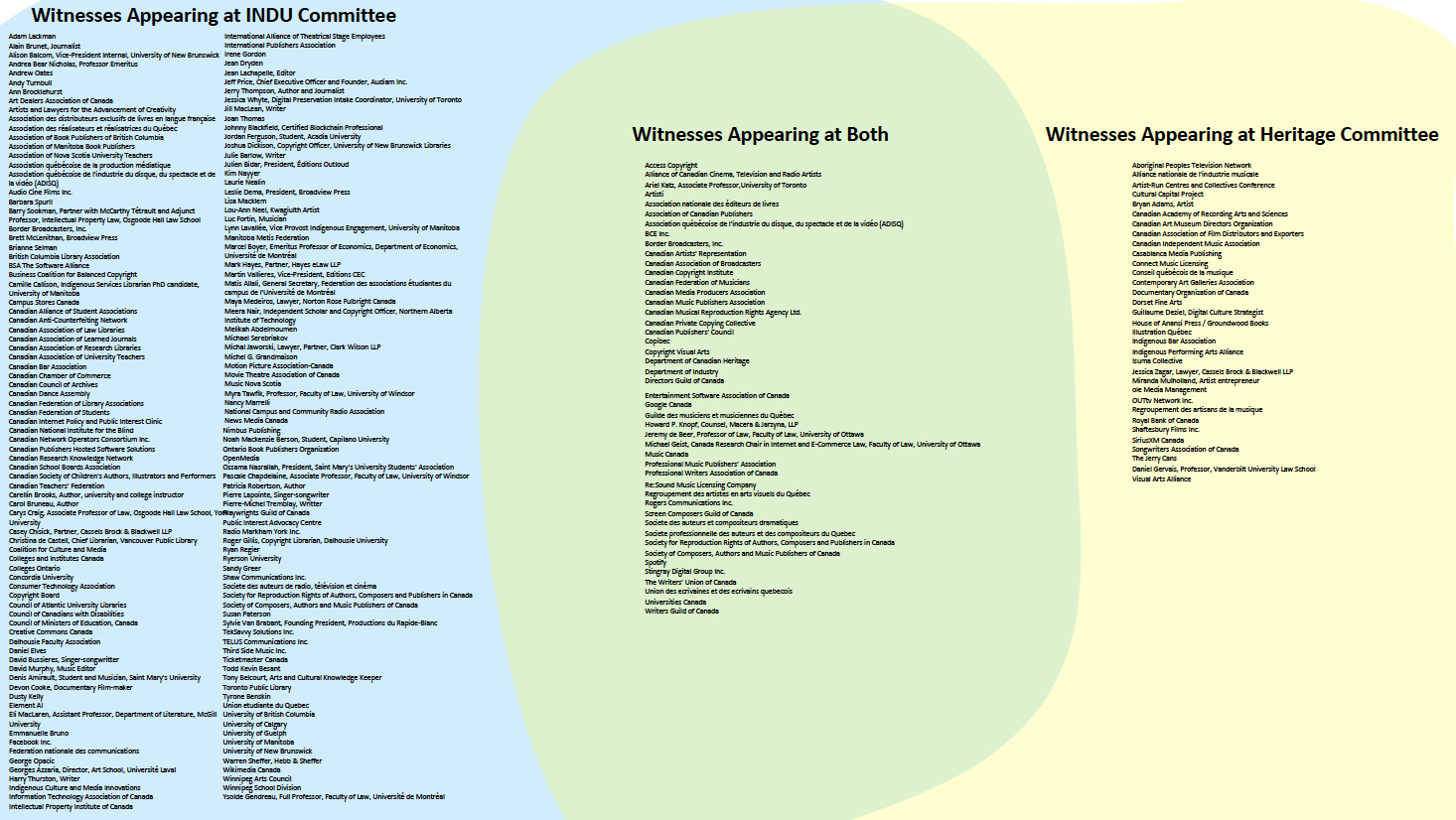 The submission of briefs tell a similar story. Both committees invited the public to submit briefs if they were unable to appear as witnesses. INDU also received far more briefs: 271 briefs went to INDU vs. just 76 to Heritage (this treats a brief submitted by multiple individuals as a single brief). A total of 58 individuals and organizations submitted briefs to both committees, In other words, Heritage only received 18 briefs that were not submitted to INDU. As a result, INDU heard from hundreds more organizations and individuals and received most of the same brief information as Heritage.

The sum total is striking. With hundreds of witnesses and briefs, there were just 51 that only involved appearances or submissions to Heritage. There were far more submissions and briefs that went to both committees and an even larger number that went exclusively to INDU. That left INDU with a much more comprehensive consultation that overlapped with much of Heritage but also included hundreds of additional witnesses and briefs. Of course, witnesses and submissions tell only part of the story. In upcoming posts, I’ll examine the breakdown of perspectives from the witnesses as well as who the committees listened to as determined by actual citations of witness comments or briefs.