The 36 articles demonstrates the value of the Toronto Star with many original local stories that might not otherwise be reported. Yet claims that Facebook is taking the Star’s content or that the situation amounts to “blackmail” is simply not born out by the data. First, the Star itself is responsible for the majority of public postings on Facebook. Of the 36 articles, 27 articles or 75% were publicly posted at least once by the Star. As I noted in my previous post on the issue, all of these articles are licensed since the Toronto Star grants Facebook a licence to host and distribute the content as part of its terms of service. Eleven of those articles were only publicly posted by the Star with no other public postings. This article on high school exams in Ontario is typical. 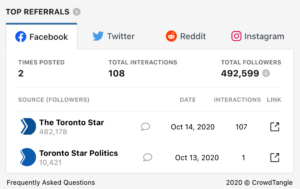 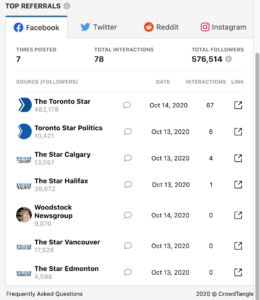 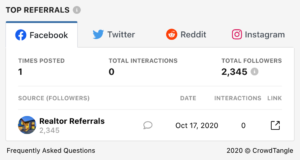 Fourth, it is worth noting which non-Toronto Star accounts typically publicly post its articles. In many instances, the posters are the subject of the article (or directly related to the story). For example, this article on affordable housing in Parkdale and the potential leasing of land from the University Health Network was one of the more active article with six non-Toronto Star public posters. The poster included the Parkdale Community Updates, University Health Network, the United Way, and the University of Toronto Medicine. The largest number of interactions still came from the Toronto Star’s own post. 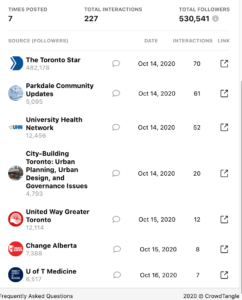 Fifth, politicians are often the source of the public postings, which is curious given Guilbeault’s claim that the activity is “immoral.” For example, this article on Conservative leader Erin O’Toole resuming in-person fundraising events was publicly posted six times by the Toronto Star and by Liberal MP Hedy Fry. 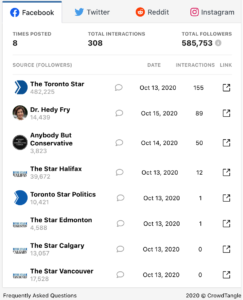 Second, this data is focused on public postings. CrowdTangle also provides aggregate data that incorporates non-public posts (ie. private sharing). The number of public and private article shares (along with all the data on posts) is posted below. The total number of article shares – both public and private – for all 36 articles was 2,663 for an average of 74 shares per article. Even leaving aside the fact that many of these shares come from the Toronto Star’s own posts, Canada’s largest newspaper by circulation generates just 74 shares per article on Facebook. The loss of ad revenue may be a significant threat to Canadian media organizations, but the claim that this can be attributed to Facebook “taking” media content simply does not accord with the data on how articles make their way onto Facebook nor what happens once those articles are publicly posted.