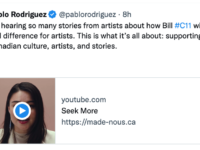 Canadian Heritage Minister Pablo Rodriguez’s credibility took another hit yesterday with an exceptionally misleading tweet on Bill C-11. The tweet featured a video of artists encouraging Canadians to seek out Canadian content, which Rodriguez used to tweet “I’m hearing so many stories from artists about how Bill #C11 will make a real difference for artists. This is what it’s all about: supporting diverse Canadian culture, artists, and stories.”  Leaving aside the fact that thousands of digital creators have vocally opposed the bill with warnings that it will result in serious harm to their careers and livelihood, the artists in the video were not speaking about Bill C-11. We know that because the video was launched in April 2021, pre-dating Bill C-11 by nearly a year and created before the government started the ruckus by removing Section 4.1 protections for user content from Bill C-10.