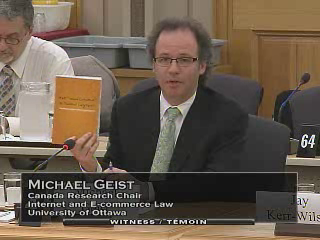 Last Call on C-11: My Appearance Before the Senate Committee on Banking, Trade & Commerce

Today is copyright day at the Senate, where the Senate Committee on Banking, Trade and Commerce is devoting seven hours to hearing from over 20 witnesses on Bill C-11, the copyright reform bill that passed the House of Commons earlier this week. I was asked to appear and participated in the first session of the day. My opening statement is posted below. The discussion focused primarily on the digital lock rules with a good opportunity to focus on the dangers of the current approach.  My recommendation was to use the regulation power found in Bill C-11 to create a digital lock exception linking circumvention to copyright infringement.

Appearance before the Senate Committee on Banking, Trade & Commerce June 22, 2012

Good morning.  My name is Michael Geist.  I am a law professor at the University of Ottawa, where I hold the Canada Research Chair in Internet and E-commerce Law. I am also a syndicated weekly columnist on law and technology issues for the Toronto Star and the Ottawa Citizen. I edited â€œFrom Radical Extremism to Balanced Copyright: Canadian Copyright and the Digital Agendaâ€, the largest academic study on Bill C-11, with peer reviewed contributions from 20 leading Canadian experts.

I appear before this committee today in a personal capacity representing only my own views. As when I appeared before the House of Commons legislative committee on then-Bill C-32 in December 2010, I wish to emphasize that I am supportive of much of what is now Bill C-11. There are many positive elements in the bill that reflect a genuine attempt at striking a balance and developing forward-looking copyright laws. However, the bill also suffers from a very serious flaw that has been the source of considerable controversy and widespread opposition â€“ the digital lock rules.

Let me start with several of the positive elements of the bill:

1. The fair dealing reforms, which add parody, satire, and education to the list of fair dealing categories, represent an attempt to strike a balance between those seeking a flexible fair dealing provision and those opposed to new exception categories altogether. I think the C-11 compromise is a good one. The government rightly rejected misleading claims that the changes will permit unlimited, uncompensated copying.  It is fair dealing, not free dealing, and the new changes will be subject to a six-factor test developed by the Supreme Court of Canada to ensure fairness.

2. The bill adds several new consumer provisions, including time shifting, format shifting, backup copies, and an exception for user generated content. Some of these exceptions are long overdue as they reflect common consumer practices.

4. The bill’s approach to Internet providers is a fair one that provides rights holders with an effective tool to counter online infringement, respects the privacy and free speech rights of Canadians, and assigns an appropriate role to ISPs.  It is a model that the legislative committee heard works well and that other countries such as Chile have begun to emulate.

While these are some of the positive elements, the digital lock rules remain a serious problem. I should clarify that much of the concern does not come from digital locks per se.  Companies are free to use them if they so choose.  Moreover, there is general agreement that there should be some legal protection for digital locks since it is a requirement of the WIPO Internet treaties.

Rather, the concern stems from C-11’s unbalanced position on digital locks in which the digital lock trumps virtually all other rights.  This distorts the copyright balance not only for the existing exceptions in the Copyright Act, but also for the new consumer rights, which can be trumped by a digital lock at a time when locks are widely found on devices, DVDs, e-books, and more.

The most obvious solution would have been to amend the bill by clarifying that it is only a violation to circumvent a digital lock where the underlying purpose is to infringe copyright.  This approach – which has been adopted by trading partners such as New Zealand, Switzerland and India (the same countries with which we are negotiating international agreements such as ACTA, CETA, and the TPP) – would have ensured that the law could be used to target clear cases of commercial piracy but that individual consumer and user rights are preserved.

This approach received wide support during the C-32 and C-11 hearings.  Business groups, creator groups, consumer groups, education groups, and library groups all supported this approach as did tens of thousands of Canadians who wrote to their elected officials on the bill. The urgency for change stems from the genuine harm the current approach may cause:

Let me conclude by reiterating that there are many good provisions in Bill C-11 and that fixing the harms caused by digital lock rules that extend far beyond international requirements was relatively easy. The decision to reject amendments to address this concern and leave the digital lock rules intact effectively locks out the blind, creates disadvantageous barriers for creators and educators, and stifles innovation. That is a cause for concern, not celebration.

That said, I recognize the urgency of getting the bill passed and the desire of many to not hold it up with further amendments. There is a solution for the digital lock problem that does not require any amendment to the bill, however. Section 41.21 (2) of C-11 includes a regulation making power to add exceptions to the digital lock rules as the government recognized that there were legitimate concerns for overbroad, anti-competitive, anti-consumer effects. Therefore, the committee should recommend a new exception be created by regulation before the bill takes effect that permits circumvention for non-infringing purposes. This approach would ensure that the bill can pass quickly, be used to target clear cases of commercial infringement, support businesses that wish to use digital locks, and ensure that many affected groups are not unduly harmed by the legislative reforms.