Come Back With a Warrant by Thomas Hawk (CC-BY-NC 2.0) 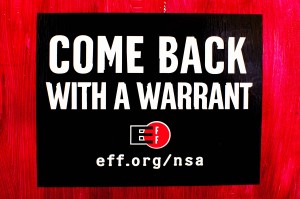 I discuss the implications below, but first some of the key findings. First, the Court recognizes that there is a privacy interest in subscriber information. While the government has consistently sought to downplay that interest, the court finds that the information is much more than a simple name and address, particular in the context of the Internet. As the court states:

the Internet has exponentially increased both the quality and quantity of information that is stored about Internet users. Browsing logs, for example, may provide detailed information about users’ interests. Search engines may gather records of users’ search terms. Advertisers may track their users across networks of websites, gathering an overview of their interests and concerns. â€œCookiesâ€ may be used to track consumer habits and may provide information about the options selected within a website, which web pages were visited before and after the visit to the host website and any other personal information provided. The user cannot fully control or even necessarily be aware of who may observe a pattern of online activity, but by remaining anonymous – by guarding the link between the information and the identity of the person to whom it relates – the user can in large measure be assured that the activity remains private.

Given all of this information, the privacy interest is about much more than just name and address.

Second, the court expands our understanding of informational privacy, concluding that there three conceptually distinct issues: privacy as secrecy, privacy as control, and privacy as anonymity.  It is anonymity that is particularly notable as the court recognizes its importance within the context of Internet usage.  Given the importance of the information and the ability to link anonymous Internet activities with an identifiable person, a high level of informational privacy is at stake.

Third, not only is there a significant privacy interest, but there is also a reasonable expectation of privacy by the user.  The court examines both PIPEDA and the Shaw terms of use (the ISP in this case) and concludes that PIPEDA must surely be understood within the context of protecting privacy (not opening the door to greater disclosures) and that the ISP agreement was confusing at best and may support the expectation of privacy.  With those findings in mind:

Fourth, having concluded that obtaining subscriber information was a search with a reasonable expectation of privacy, the information was unconstitutionally obtained therefore led to an unlawful search. Addressing the impact of the PIPEDA voluntary disclosure clause, the court notes:

Since in the circumstances of this case the police do not have the power to conduct a search for subscriber information in the absence of exigent circumstances or a reasonable law, I do not see how they could gain a new search power through the combination of a declaratory provision and a provision enacted to promote the protection of personal information.

There are several important implications that flow from this decision. First, with a finding that police need a warrant for subscriber information (except in exigent circumstances), the practice of obtaining information on a voluntary basis should come to an end.

Second, the government’s plans for expanded voluntary, warrantless disclosure under Bill C-13 must surely be reformed as it is unconstitutional. Just yesterday, Conservative MP Bob Dechert relied on R. v. Ward to support the C-13 approach with respect to immunity for voluntary disclosure. The court has effectively rejected the Ward decision and Dechert’s defence of the provision no longer stands.

Fourth, Internet providers need radical reform of their current approach to disclosure of subscriber information. The Supreme Court examined Shaw’s terms of service policy and found it provided “a confusing and unclear picture of what Shaw would do when faced with a police request for subscriber information.”  The same can be said for virtually every ISP in Canada. While ISPs have been regularly disclosing this information hundreds of thousands of times, the Court ruled:

The court notes that ISPs are not required to disclose this information and this case reaches the conclusion that they are not permitted to do so absent a warrant either.  This means ISPs must change their practices on voluntary warrantless disclosure. Much more to come on a decision that seems likely to define Internet privacy for many years to come.