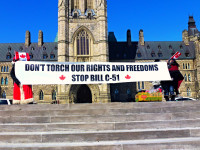 From Obama Birthers to Anti-Immigration Activists: Who the Government Turned to for Bill C-51 Support During Committee Hearings

The Standing Committee on Public Safety and National Security completed its clause-by-clause review of Bill C-51 yesterday with a hearing that Green Party leader Elizabeth May described as the “most offensive she has experienced.” In all, the government rejected 61 Green Party amendments, 28 NDP amendments, and 13 Liberal amendments. Yesterday I posted a “by the numbers” review of the committee hearings on Bill C-51 noting that Conservative MPs rarely asked substantive questions about provisions in the bill and that important voices such as the Privacy Commissioner of Canada were blocked from appearing altogether.

One of the most striking aspects of the hearings was how difficult it was for the government to find expert supporters of the bill. There were certainly some – police associations, Robert Morrison, Peter Neumann, Garth Davies, Christian Leuprecht among them – but the line-up of supporting organizations also included: